Acer is giving its Swift line of thin and light laptops a power boost with the move to 12th-gen Intel Core processors based on the new 28-watt Alder Lake-P architecture.

Acer says this thin and light notebook will sell for $1499 and up when it hits North America in June, but first it will go on sale in Europe, the Middle East and Africa in March with a starting price of 1,799 Euros before rolling out in China in April for 9,999 CNY.

Powered by either an Intel Core i5-1240P or Core i7-1260P processor, the laptop has four Performance CPU cores and eight Efficient cores (for a total of 16 threads) and Intel Iris Xe integrated graphics.

The new Swift 5 also has an aluminum unibody chassis, support for up to 16GB of LPDDR5 memory and up to 2TB of PCIe Gen 4 solid state storage.

It’s an Intel Evo-verified computer with a 14 inch, 2560 x 1600 pixel touchscreen display with 100% sRGB color gamut and 425 nits brightness, plus slim bezels for a 92.22% screen-to-body ratio and an antimicrobial Gorilla Glass coating.

There’s backlit keyboard and an OceanGlass touchpad made from ocean-bound plastic, but processed to feel like glass. And the notebook has a fingerprint reader, a full HD webcam, and support for fast charging: Acer says you can get 4 hours of battery life from a 30 minute chare.

This notebook is also powered by a 12th-gen Intel Core processor, support sup to 2TB of storage, dual fans for cooling, an FHD webcam, and fast charging support. 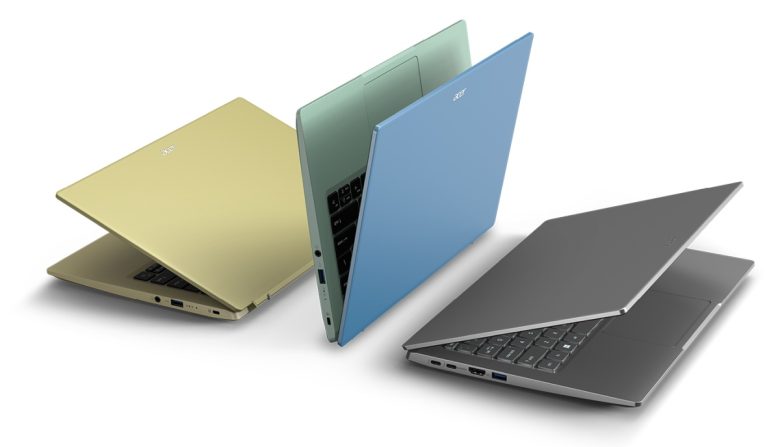 But it’s a more affordable notebook with USB-C rather than Thunderbolt, a choice of FHD or QHD displays (both with a 16:9 aspect ratio), and it will sell for $849 and up when it launches in North America in June. It will hit the EMEA and China in April for 1,199 Euros and 5,499 CNY, respectively.

That starting price will be fore a model with an Intel Core i3-1220P processor, which is a 10-core, 12-thread chip with two Performance CPU cores and eight Efficient cores. But the laptop will also be available with Core i5-1240P and Core i7-1260P processor options.

You can find out more about Intel’s new Alder Lake-P processors in our article on the company’s new 12th-gen chips in the 9 to 28-watt base power range.