The first laptops with 12th-gen Intel Core processors went on sale at the end of January, but so far the only models available are powered by 45-watt Alder Lake-H processors.

Now Intel is starting to provide mode details about what we’ll be able to expect from thinner, lighter notebooks powered by Alder Lake-P (28-watts), and Alder Lake-U (9 to 15 watt) processors). 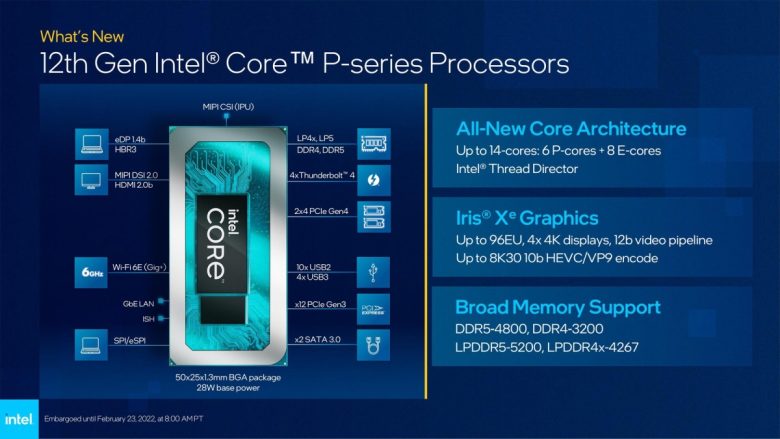 Intel had already provided some information about key specs for these chips during the Consumer Electronics Show in January, but Alder Lake-H was the star of that show, with an emphasis on the company’s new high-performance chips for gaming laptops and mobile workstations.

The U and P series chips will most likely show up in mainstream laptops, thin and light systems, and power-constrained devices like 2-in-1 tablets with detachable keyboards as well as small form-factor desktop computers.

The company also compared the i7-1280P to Apple’s M1 processor (Intel says its chip is 20% faster in at least some multi-core tests when both chips are set to 35-watts), and AMD’s Ryzen 7 5800U (Intel says its chip is 40% faster). Of course, it’s worth taking these benchmark results with a grain of salt, since Intel may have cherry-picked tests that paint its processors in the most positive light… and since Intel is comparing its best P series chip with last year’s best Apple and AMD processors in a similar power range, rather than this year’s AMD Ryzen 6000U chips or Apple M1 Pro or Max chips. 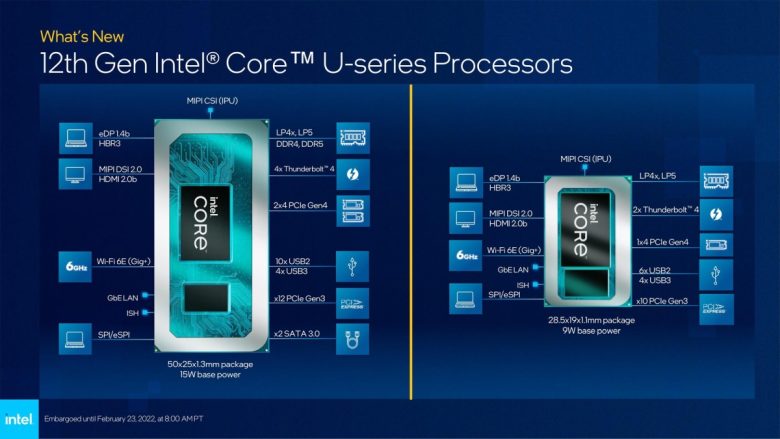 Intel isn’t saying much about the performance of its U series processors yet, which could be an indication that Alder Lake-P will ship first… or that Intel just wants to focus on its highest-performance processors.

Either way, an interesting side note here is that while everything is grouped together under U or P series labels, in some ways these are three different sets of chips.

While the 28-watt chips run at higher speeds and have more Performance cores, these chips are a lot like their 15-watt counterparts in some key ways, since both have:

Intel’s new 9-watt chips, meanwhile, come in similar combinations of P and E cores to their 15-watt siblings, but these processors are clearly designed for thinner, lighter, lower-power devices.

They take up less size, use less power, generate less heat, and have more constraints:

So it’s interesting to see that Intel breaks out the 28-watt chips as a new brand that falls somewhere between the energy-efficient U series and the high-performance H series, but doesn’t do anything similar for the 9-watt chips.

I suspect that might be due to the fact that the company’s first crack at using the M label for low-power chips in the 4.5-watt range might not have been well received. Intel only really the M for 6th, 7th, and 8th-gen processors before phasing it out. Last year’s 11th-gen Core processors used the U label for everything in the 7 to 28-watt range.

And honestly, it’s kind of hard to argue with that strategy. Last year I reviewed a Lenovo ThinkPad X1 Nano laptop with an Intel Core i7-1180G7 processor designed to run in the 7-15 watt range, and honestly it felt nearly indistinguishable from a system with a 15-28 watt chip like the Core i7-1165G7 in real-world performance.

I’ll be curious to see whether the same holds true for Intel’s 12th-gen 9-watt and 15-watt chips.

Intel says we can expect more than 250 computers powered by Alder Lake-U and P series chips this year, including new foldables and other thin and light systems with 9-watt chips. The first laptops powered by these new chips should begin to arrive in March.

One thing we’re unlikely to see? A lot of laptops featuring this chips with discrete graphics. While it is technically possible for PC makers to equip a notebook with an Alder Lake-P or U series processor with a discrete GPU, AnandTech reports that Alder Lake-H chips are a better fit for that thanks to a PCIe x8 Gen 4 link which the lower-power chips lack.

via NotebookCheck and Tom’s Hardware