Zotac is updating its line of tiny desktop computers with a set of new B Series systems featuring Intel Gemini Lake processors.

Zotac hasn’t announced the price yet, but the ZBOX BI329 will come in at least three versions. 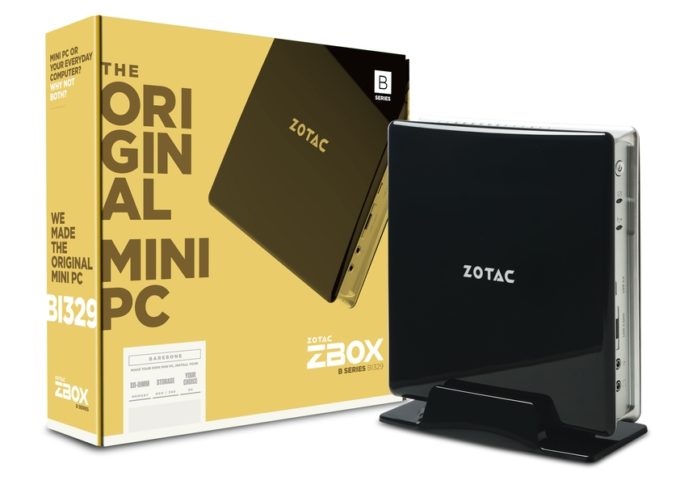 The ZBOX BI329 is a barebones model, while the ZBOX BI329 Plus comes with 4GB of RAM and a 120GB SSD pre-installed, but you’ll still need to supply your own operating system.

Finally there’s the Zotac ZBOX BI329 with Windows. As the name suggests, this model comes with Windows 10 pre-installed. Like the Plu model, it also has 4GB of RAM, but the Windows version has a 32GB M.2 SSD instead of a 2.5 inch 120GB SSD.

All three models have HDMI 2.0a, DisplayPort 1.2, and VGA outputs as well as a USB 3.0 Type-C port, two USB 3.0 ports, and a USB 2.0 port. There are also mic and headphone jacks, an SD card reader, and an external antenna that you can screw on and adjust.

It’s also easy to upgrade the memory or storage: the computer is designed so that you can take it apart and get at the insides without a screwdriver.

Unlike some of Zotac’s other mini PCs, the ZBOX BI329 is not fanless. But the company does claim that its fan offers “whisper quiet performance”.