The Yotaphone 2 is an Android smartphone with two displays: a full color screen on one side of the phone and a black and white E Ink display on the other.

The company behind the phone launched it in select markets in late 2014 and the Yotaphone 2 is coming to America soon through an Indiegogo crowdfunding campaign that should launch in July.

Ahead of that planned US launch, the Yotaphone 2 is getting a few updates, including new software, a price cut, and a new color option. 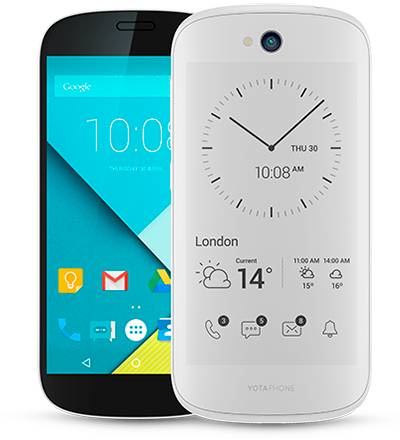 The folks at Engadget got a look at a new version of the Yotaphone 2 with a white plastic body instead of black. The front of the phone is still black, but the sides and back are white and the volume and power buttons are now brushed metal.

Engadget also reports that the new model will ship with Android 5.0 Lollipop software, and an over-the-air update is rolling out which will bring Android 5.0 to existing customers for a while.

Yota is also updating its own software to improve the functionality of the E Ink display, which can either be used to either mirror the action of the color screen (even when that screen is off) to let you run any Android app, or to display a series of custom apps designed specifically for Yota’s dual-display devices).

The biggest news may be the price drop though: the Yotaphone 2 is now available in the UK for £440 and in other parts of Europe for €599.

It’s still too early to say how much the phone will cost when it launches in the United States. Phones tend to cost a little less here since taxes aren’t included in the sales price. But it’s unlikely the Yotaphone 2 will be priced like a budget device.