But the hardware is virtually identical to what you’d find in a cheap Windows laptop. So if you’re not satisfied with the 2GB of RAM and 320GB hard disk that come with the Acer C7, you can take off the bottom panel and upgrade or replace them yourself. 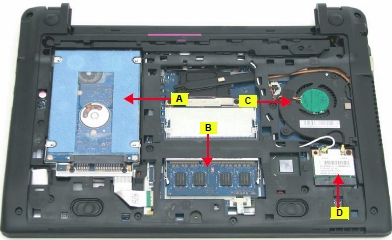 The method for opening up the Acer C7 is pretty much exactly the same as for opening the Acer Aspire One 756 notebook (which is a slightly more expensive version of the same laptop that ships with Windows instead of Chrome OS). You can find details at the Acer support site.

In order to open the access panel you do have to break a little sticker hiding a screw. So if you send in your laptop for repair, Acer will be able to tell that you’ve tampered with it. But how much do you really care about the warranty on a $199 laptop anyway?

But once the case is open, you’ll notice that there are actually two memory slots. One is filled with a 2GB stick of RAM, leaving the second for upgrades.

All told, that means you could install up to 16GB of memory in the Chromebook, although most people probably won’t need more than 4GB or so (unless you regularly have a few dozen browser tabs open at once.

Opening the rear panel also exposes the 320GB hard drive, which is hooked up to a SATA connector. You should be able to replace it with a larger hard drive or a faster SSD if you really want — although you’ll either need to bring your own operating system or clone the drive.

Upgrading the memory is probably one of the cheapest ways to improve performance on the inexpensive Acer C7 Chromebook. But if you plan to turn this laptop into a Windows or Linux machine, you may also want to invest some money in a faster or larger storage drive.

via Engadget, David, and David Bauer