Xiaomi’s original “Redmi” phone is a 4.7 inch Android phone with a 720p disply, a quad-core CPU, and a price tag of just over $130. Now it looks like the Chinese company step up its game with a bigger, faster model.

The Xiaomi Redmi Note has a 5.5 inch screen and an octa-core processor. 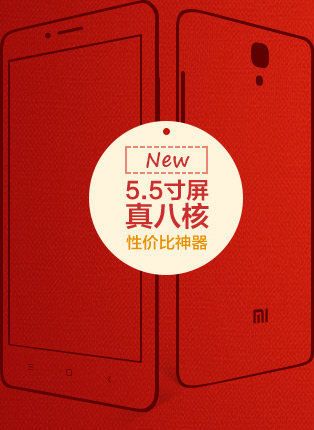 Xiaomi hasn’t revealed detailed specs yet, but the phone is set to go up for order in China on March 19th.

According to Engadget, it’ll likely have a 1280 x 720 pixel display, a MediaTek processor, 1GB of RAM, a 13MP camera, and Xiaomi’s custom version of Android 4.2 Jelly Bean, called MIUI.

Pricing hasn’t yet been announced, but the company’s Redmi brand seems to be used for low-cost devices with decent, but not spectacular specs. It’s also not yet clear if this phone will be China-only, or if it’ll be one of the models Xiaomi is starting to market internationally.