Wearable electronic devices had a record quarter according to new figures from research firm IDC.

The company has put out a report estimating that 84.5 million “wearable devices” were shipped  in the third quarter of 2019, which is nearly twice as many as shipped during the same period a year earlier.

Why the big boom? IDC attributes it to “hearables,” or wireless earbuds and headphones, which made up close to half of the market. 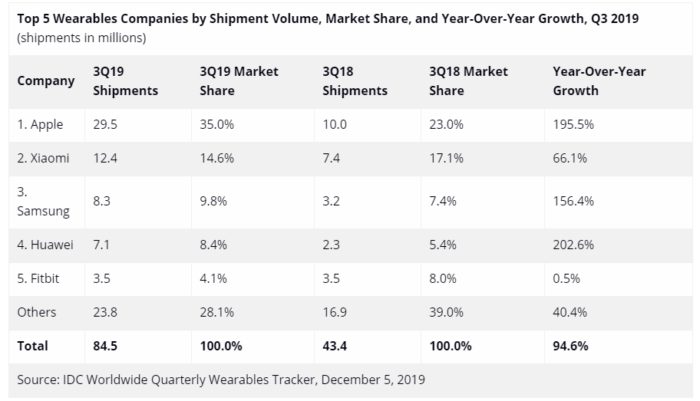 I can’t help but wonder if this is as much about changing the definition of a wearable device as it is about a growth in the category. It seems like traditional wearables including smartwatches and fitness trackers haven’t budged much. But with wireless “hearables” like Apple’s AirPods and other Bluetooth earbuds with support for voice assistant features, the overall category looks a lot bigger.

That said, wireless headphones with microphones and support for Siri and Google Assistant have been around for a long time. It’s not entirely clear to me where IDC draws the line between plain old headphones and a “hearable,” but the company does claim to have seen a 242-percent year-over-year growth in “earwear” alone.

Anyway, according to the company’s numbers, Apple dominated shipments in Q3, with 29.5 wearables including AirPods, Apple Watches, and Beats headphones.

Xiaomi, which sells inexpensive fitness trackers and earbuds came in second, followed by Samsung, Huawei, and Fitbit (which is in the process of getting eaten up by Google).