VIA is updating its low power line of Nano processors. The new Nano 3000 chips feature a 64-bit architecture and run from 1GHz to 2GHz. They’re all capable of handling 1080p HD video playback.

According to VIA, the new chips outperform earlier Nano processors by more than 20% in the PCMark 05 and 3Dmark 2006 benchmarks. In those same tests, the Nano 3000 processors outperform the 1.6GHz Intel Atom N270 CPU by about 40% to 50%. Meanwhile, the new chips use up to 20 percent less power than VIA’s current offerings.

The VIA Nano 3000 chips are compatible with earlier VIA sockets, which means that PC makers can easily slot the Nano 3000 into motherboards designed for VIA C7, C7-M, Eden, and earlier Nano processors.

There are six models in the VIA Nano 3000 series. You can read more about them in the chart after the break. 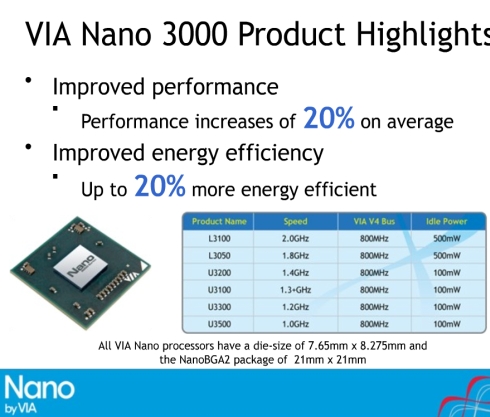