The latest version of Ubuntu is here, bringing a number of performance enhancements, bug fixes, and software updates to the popular Linux-based operating system.

Ubuntu 18.10 Cosmic Cuttlefish is now available for download from Ubuntu.org. 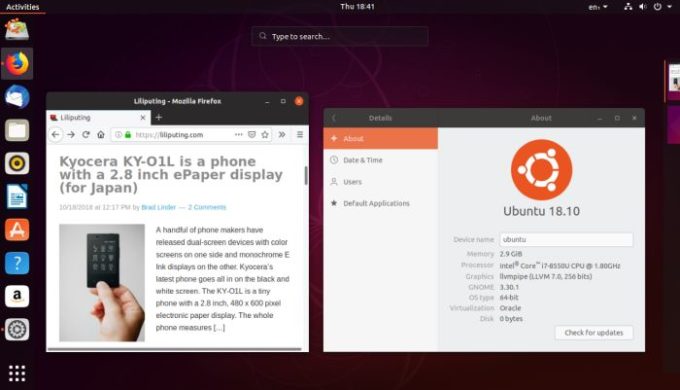 The operating system supports a variety of desktop environments, but the default version of Ubuntu now includes the GNOME 3.30 desktop environment, with a number of performance updates and a new default theme named Yaru (formerly called “Communitheme“).

Ubuntu 18.10 also comes with Firefox 63, LibreOffice 6.12, and a bunch of other updated apps pre-installed. But overall this is a relatively modest updated over Ubuntu 18.04, which is the LTS (long term support) version of the operating system that shipped earlier this year.

There aren’t many major changes to the core apps or features and many of the app updates are available to Ubuntu 18.04 users now that they’re available as Snap packages. So if you don’t need the improved hardware support or performance updates that come with the kernel and desktop environment updates, there might not be that much reason to update — especially since Ubuntu 18.04 will be officially supported through early 2023, while Ubuntu 18.10 only gets 9 months of security updates, ending in mid-2019.

You can read more about changes in Ubuntu 18.10 in the release notes.