The Tronsmart MK908 is an Android TV stick with a quad-core processor, 2GB of RAM, 8GB of storage, and strong WiFi performance. Like other Android sticks I’ve tried, it’s designed to let you run Android apps on a TV, and it’s probably one of the best devices of its type I’ve tested in the past year.

Geekbuying sells the MK908 for about $90, and the company sent me a unit to test. 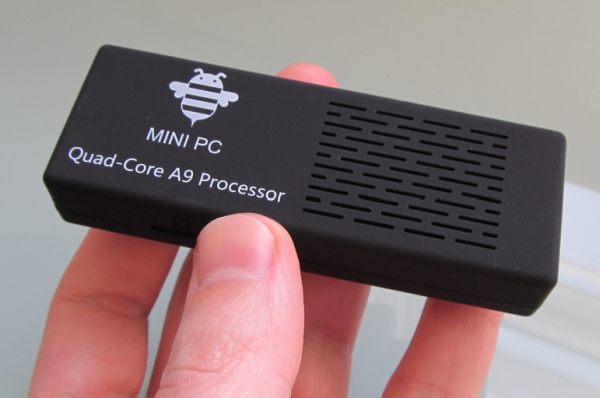 The MK908 looks a bit like a chunky USB flash drive. But it’s a full-fledged mini computer with a Rockchip RK3188 ARM Cortex-A9 quad-core processor. Out of the box it runs Android 4.1 Jelly Bean, but it’s possible to upgrade the firmware and new software (or custom ROMs) become available.

On one end of the stick you’ll find a mini HDMI port. The other features a full-sized USB port and a mini USB port. On one side there’s a microSD card slot, and on another there’s a second mini USB port.

Use the included HDMI cable to connect the MK908 to a TV and plug the power supply into the mini USB port on the end and the device should boot into Android in under a minute. There’s also a mini USB to full-sized USB adapter in the box in case you want to plug in more than one USB peripheral.

For instance you could connect a keyboard and mouse, a remote control and a gamepad, or other hardware that Android should automatically detect.

In my tests I used two different wireless keyboard and mouse or touchpad options, and both worked just fine.

The MK908 features built-in 802.11n WiFi and Bluetooth 4.0. I haven’t really tried out the Bluetooth function, but WiFi performance is great. I’ve had problems getting some other Android TV sticks (and tablets) to work in my third floor office because my wireless router is on the first floor. The MK908 works just fine anywhere in the house.

It’s also one of the fastest Android devices I’ve ever tested. While it doesn’t score quite as well in benchmarks as the Cube U30GT2 tablet (which is interesting, since they both have the same processor and the same amount of RAM), it’s faster than the Google Nexus 7 tablet with an NVIDIA Tegra 3 quad-core CPU or the Coby MID8065, which has an Amlogic AM8726 dual-core processor. 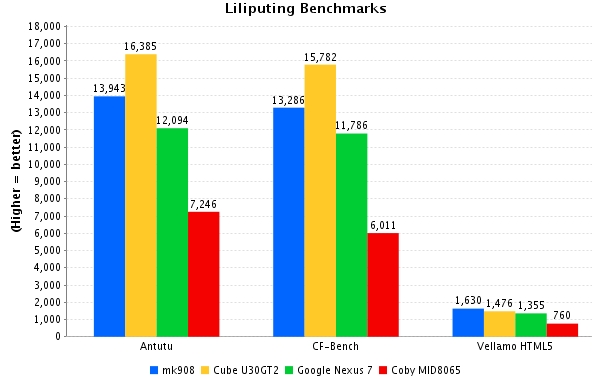 In terms of real-world activities, the MK908 opens web pages quickly, streams audio and video over the internet without problems, and has full access to the Google Play Store, where you can download hundreds of thousands of apps.

For $90 you can get a device capable of running far more apps than you’d get on any set-top-box running Google TV. Unfortunately you also get a user interface that’s designed for touchscreens rather than remote controls — and some apps that are available for Google TV such as Amazon Video aren’t available for Android devices like the MK908.

Still, if you connect a wireless keyboard and mouse you can use the MK908 to turn your TV into an internet-connected media center. It streams videos from Netflix and Google Play Videos without any problems at all.

I was also able to stream videos from a shared network drive. Since I have a home theater PC set up as a digital video recorder, I have hundreds of TV shows and movies hanging out on a hard drive. Rather than transfer those files to the MK908, I can stream them using a video player such as MX Player.

Unfortunately performance was a bit shakier when I tried using the XBMC media center app for Android. Right now it appears there’s not support for hardware-accelerated video playback in XBMC, so some videos had low frame rates and audio/video sync issues.

It also took longer to load my video folder and launch videos using XBMC. That’s a shame, because XBMC is designed for big-screen devices like televisions, while MX Player is designed for smartphones and tablets. But XBMC is also still under active development and it’s possible that future builds will work better on devices like the Tronsmart MK908.

As it is, I wasn’t able to run XBMC 12.1 at all. It was only after installing XBMC 13 Alpha 2 that I was able to run the media center software on this mini PC.

Tronsmart ships the MK908 pre-rooted, which means you can install apps that require root permissions such as Titanium Backup.

The Tronsmart MK908 is available for purchase from Geekbuying for $90.