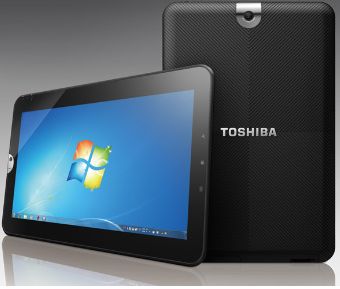 Toshiba Japan has unveiled a new slate PC with an 11.6 inch display and Windows 7 operating system. It looks almost exactly like the company’s upcoming 10 inch Android tablet thanks to the front and rear camera placement and the textured back panel. But you’ll notice the key difference in the press pictures: It’s running Windows instead of Android.

The tablet will feature a 1.5 GHz Intel Atom Z670 Oak Trail processor, 2GB of RAM, and a 64GB SSD. It has a 1366 x 768 pixel capacitive touchscreen display, WiFi, Bluetooth, HDMI output, and an SDXC card slot.

Toshiba’s Windows tablet will weigh about 2 pounds and measure about 0.6 inches thick. It’s due out in mid-June… at least in Japan. There’s still no word on when the company’s Android tablet will actually go on sale.