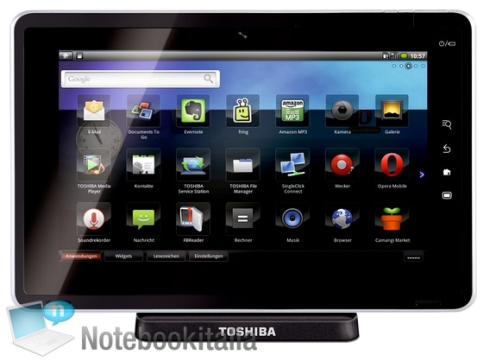 Toshiba hasn’t had much to say about its upcoming Android tablet so far, other than the fact that it is working on one. But this week the first purported images of the tablet hit the web, and now Notebook Italia says it’s obtained has detailed specs.

The tablet will reportedly have 16GB of internal storage space, support for SDHC cards up to 32GB for additional storage, and up to 7 hours of battery life.

Like the Toshiba AC100 Android netbook, the Folio 100 will ship with the Opera Mobile web browser with Adobe Flash support, as well as other custom software including a PDF reader, eBook app, and RSS news reader. It’s not clear if it will have Android Market access, but the tablet does appear to have 3G capabilities (in addition to 802.11b/g/n WiFi and Bluetooth), so if it can make phone calls it might also be able to run Google’s app suite including the Android Market. There will definitely be a Toshiba Market app for downloading some third party apps.