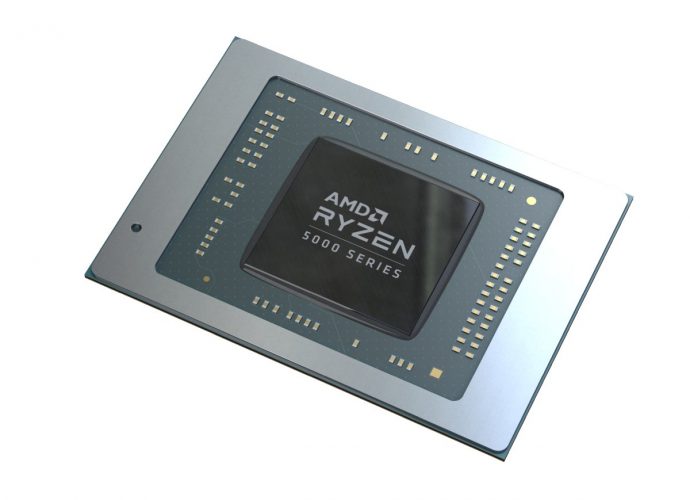 It’s too early to say whether these sorts of performance gains will be available in all of AMD’s new chips. Like most companies, AMD sent out review units configured to show off its new technology in the most flattering light.

With that in mind, it’s interesting to note that while AMD promises “impressive” battery life for notebooks with Ryzen 5000 HS series processors, reviewers suggest that the Asus ROG Flow X13 tops out at around 6 hours of run time for general usage or closer to an hour for gaming.

But it’s worth noting that the laptop only has a relatively modest 62 Wh battery and in addition to AMD’s processor, it packs NVIDIA GeForce GTX Max-Q integrated graphics (and the laptop comes with an external graphics dock with an NVIDIA GeForce RTX 3080 GPU for when you need more horsepower and don’t mind plugging in). All of which is to say, you may see longer battery life from other notebooks with the same processor. 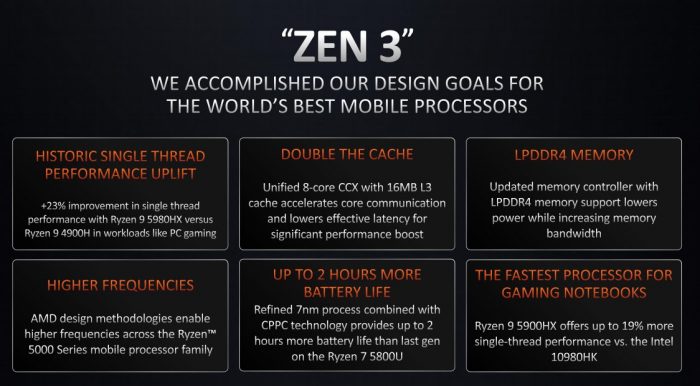 The Ryzen 5000 H series processors feature the same AMD Radeon Vega integrated graphics as the chip maker’s 4000 series chips rather than newer GPUs based on the company’s RDNA graphics technology. But AMD has increased the top frequency, which should allow you to squeeze a little extra graphics performance out of the new chips.

The decision to focus primarily on the CPU cores may also be part of what allowed AMD to make the new chips pin-to-pin compatible with last year’s mobile chips, making it easy for PC makers to upgrade their designs quickly.

And when it comes to CPU-specific tasks, it looks like AMD’s new chips are competitive with the latest Intel Tiger Lake processors when it comes to single-core performance, and the Ryzen 5980HS comes out way ahead in multi-core tests, which is unsurprising since it has twice as many CPU cores and threads as Intel’s chips. 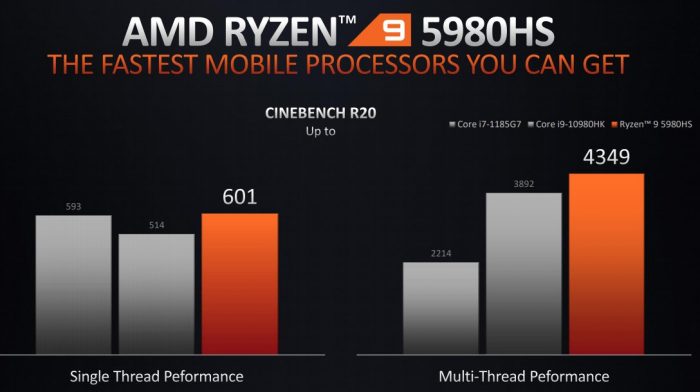 You can find more details in the following reviews and write-ups:

And here’s an overview of the complete Ryzen 5000 H series processor lineup: