The CutiePi is a tablet computer that’s a little different from most tablets on the market. It’s a relatively inexpensive tablet. It’s designed to run a Linux-based operating system with a custom, tablet-friendly user interface. It has a built-in handle that also works as a stand, and an open hardware design. And the CutiePi is powered by a Raspberry Pi Compute Module. 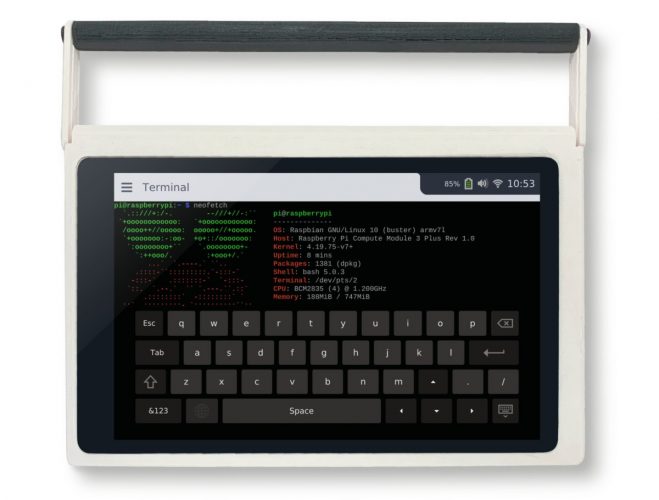 The good news is this means the brains of the tablet will now be a computer module with a 1.5 GHz ARM Cortex-A72 quad-core processor rather than a 1.2 GHz ARM Cortex-A53 quad-core chip. The bad news is that if you already have a Raspberry Pi CM3+ Lite that you’d been hoping to use, it won’t be compatible with the redesigned CutiePi.

CutiePi’s makers say the tablet will begin shipping to Kickstarter backers in April, but folks who missed out on the campaign can now place a pre-order for $199 for a tablet that should ship in July. The full retail price is expected to be $229.

For that price you’ll get a tablet with an 8 inch, 1280 x 800 pixel IPS LCD touchscreen display, version 2 of the CutiePi motherboard, a Raspberry Pi Compute Module 4 Lite with 2GB of RAM and a Broadcom BCM2711 processor, a 5,000 mAh battery, WiFi 5, Bluetooth 5.0, a 5MP camera, USB-A and USB-C ports, a micro HDMI port, and a microSD card reader.

It’s designed to run Raspberry Pi OS with the CutiePi Shell user interface, but theoretically any software that’s compatible with Raspberry Pi hardware should run on the device.

via CNX Software and Hacker News