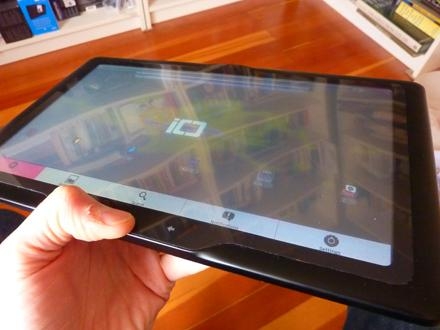 Sure, the Apple iPad is hogging the headlines this week month year. But if there’s one thing I think hope the the iPad will accomplish, it’s this: mainstream acceptance of tablet computers. PC makers have been putting out tablets for a decade, but they’ve never garnered this much attention. It’s possible that Apple’s successful launch of the iPad is only good news for Apple. But a lot of folks are hoping it means the successful launch of a completely new (or rather improved) product category: portable internet tablets.

A few years ago Asus introduced the first $400 netbook that weighed less than 3 pounds and sparked the netbook revolution. It’s quite possible that the iPad will spark a tablet revolution. What’s not clear yet is whether the Windows tablets of yore will be able to compete, or if part of that revolution is the realization that touchscreen tablets require completely new software that’s designed from the ground up for to be used with your fingertips — like the iPod OS used in the iPad and like the Google Android operating system many competitors are using.

One of the most hotly anticipated iPadcompetitor is the Notion Ink Adam tablet. Sure, it comes from a company that was virtually unknown up until a few months ago. But the Adam checks all the boxes on a geek’s wish list: NVIDIA Tegra 2 graphics for HD video playback? Check. Pixel Qi display for reading books in direct sunlight or watching full color movies? Check. Google Android operating system? Got that too.

But while Notion Ink has been showing off the Adam since January, it’s still not ready to ship yet. While the launch date had been set for June, Notion Ink says the tablet won’t be ready until it’s 100% compatible with Adobe Flash. The company is also still working on deals with telecoms to subsidize the tablet. All in all, it’s possible we might not see this thing until this Fall or later.

Another tablet that’s been getting some attention this week is the ICD Gemini. This tablet is a bit bigger than the Notion Ink or Apple tablets, with an 11.2 inch 1366 x 768 pixel touchscreen display. And while we only got to see some press shots yesterday, the folks at Stuff.tv managed to get some hands-on time with a pre-release version of the tablet.

The good news is that it’s definitely a real product with NVIDIA Tegra 2 graphics and a nice big (but rather glossy) display. The bad news is that it won’t be ready to ship until August and the pre-production unit is still pretty rough around the edges.

The ICD Gemini’s 16:9 display looks great for watching videos, but a bit awkward for web browsing — since most web sites aren’t really designed for widescreen displays. The Stuff.tv folks say the web browsing experience is excellent, and that pages render even faster than on the Google Nexus One, which is currently one of the fastest Google Android smartphones on themarket.

Finally, in case you had any doubt that today’s tablets are easier to use than those of yesterday, check out the video after the break. It shows Todd La 2.5 year old handling the iPad for the first time — and pretty much knowing exactly what to do with it. To be fair, the little girl is the daughter of Laughing Squid’s Todd Lappin and she’s spent a fair bit of time with an iPhone. But she also managed to figure out how to double the size of iPhone apps to make them full screen without much difficulty.