NVIDIA may be preparing to launch a new tablet designed for gaming. Last month we saw reports of an upcoming “NVIDIA Shield” tablet which would support the company’s GameStream system for streaming PC games to a mobile device.

Now there’s a page for a “Shield Tablet” and the NVIDIA TegraZone website. 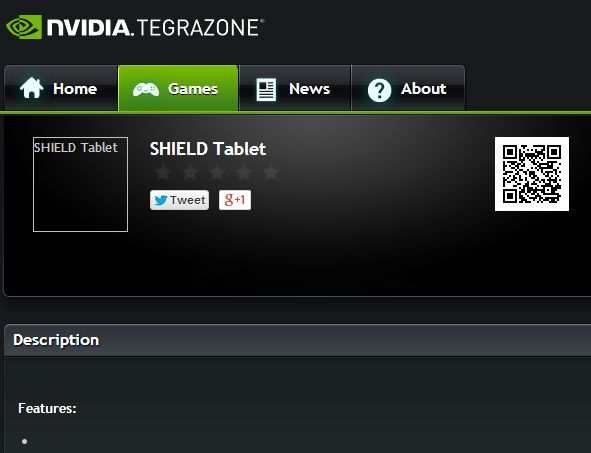 Unfortunately, there are absolutely no details about the tablet… and if you scan the QR code next to the Shield tablet name it just takes you to store.nvidia.com/buyshield where you can buy the original NVIDIA Shield handheld gaming system, which is a clamshell device rather than a tablet.

It’s also unclear why the “Shield Tablet” would show up first in the “Games” section of the TegraZone website.

Still, this is the first time we’ve seen the words “Shield” and “tablet” placed next to one another on an NVIDIA website, which suggests that there might be some truth to last month’s rumor.

Specs for an unreleased device called the NVIDIA Mocha were also leaked by online benchmark results in May. They describe a system with an NVIDIA Tegra K1 processor and a 7.9 inch, 2048 x 1536 pixel display.