Samsung’s 2019 smart TV lineup will support all the usual streaming video services including Netflix, Hulu, Amazon, YouTube and Google Play. But Samsung has announced that they’ll also have an Apple iTunes Movies and TV Shows app and AirPlay 2 support.

That will make Samsung’s TVs the first third-party media streamers to support iTunes. Up until now if you’ve wanted to watch your iTunes content on a TV you’ve either needed to buy an Apple TV box or connect your computer to your TV.

It also marks the first time, to my knowledge, that you’ve been able to access Google Play Movies and iTunes on the same media streaming device. 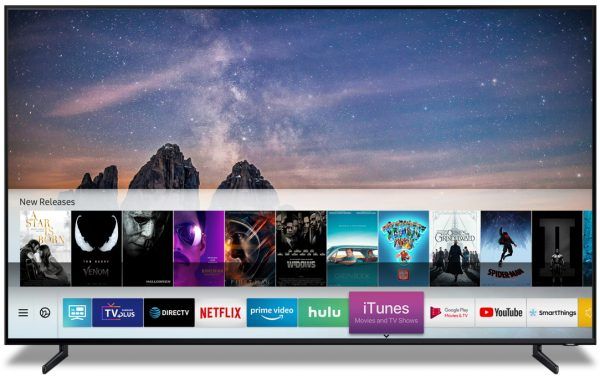 Samsung says users will be able to buy or rent videos from iTunes or access their existing libraries of content, including 4K HDR movies.

AirPlay support also means that you’ll be able to stream content from an iPhone, iPad, or Mac computer to a TV. Samsung is the first company to announce a TV with AirPlay 2 built-in, but according to Apple’s website, “leading TV manufacturers are integrating AirPlay 2 directly into their TVs,” suggesting that more announcements could be on the way.

It’s unclear if the same can be said for iTunes. But if Apple is willing to work with Samsung to let customers stream content on its rival’s smart TVs, it’s not hard to imagine iTunes eventually working with Roku, Amazon Fire TV, or even Android TV/Chromecast.

Update: Yup. According to updated information on the Apple website,  AirPlay 2 service will be compatible with a bunch of Samsung, LG, Sony, and Vizio smart TVs.