Samsung is showing off a new version of its Series 9 ultraportable notebook with a WQHD display. That stands for wide quad, high definition — which is another way of saying this laptop has a 13.3 inch, 2560 x 1440 pixels screen. 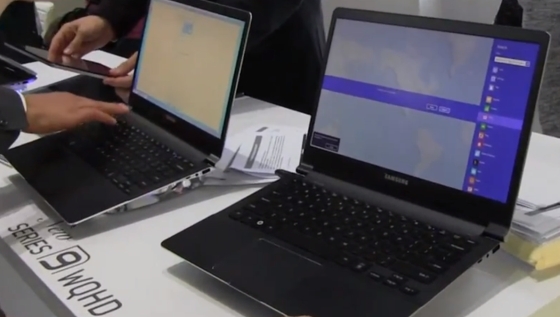 Nicole from MobileGeeks spotted the new high definition model on display at IFA in Berlin this week.

The Samsung Series 9 is a thin and light laptop with a DisplayPort, HDMI, and 2 USB ports. It has a full-sized island-style keyboard and a large touchpad, and this model also has a matte display.

It’s not clear whether Samsung actually plans to bring the Series 9 WQHD model to market, but if it does, the laptop probably won’t be cheap.

The latest Samsung Series 9 notebooks with 13.3 inch displays sell for around $1000 and up

— although you can sometimes find older models for better prices.

There’s also a dual screen prototype with two WQHD displays, one on each side of the lid ) so you can close the lid and use the computer like a tablet. Expected price for that one? Even less cheap.