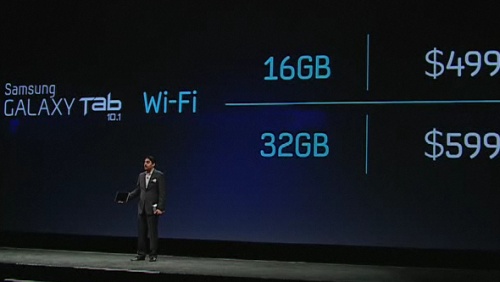 Samsung has announced pricing and availability for the Samsung Galaxy Tab 10.1. The company’s first 10.1 inch Android tablet will launch in the US on June 8th with a starting price of $499 for a WiFi-only model with 16GB of storage. A 32GB model will run $599.

The company also unveiled a new 8.9 inch tablet this morning, which will launch later this summer for $469 and up.

The Samsung Galaxy Tab 10.1 features a 1 GHz NVIDIA Tegra 2 dual core processor, a 10.1 inch, 1280 x800 pixel display and Google Android 3.0 Honeycomb operating system. It will also be one of the first devices to offer TouchWiz 4.0, Samsung’s custom software that runs on top of Android, offering additional features including a social hub that pulls in the latest info from your email, messaging, and social applications, and Live Panels which can display constantly updated information such as email messages , news, calendar, and other data on the home screen.

The TouchWiz software won’t actually be available at launch, but will come as a future upgrade.

The 10 inch tablet features front and rear cameras and will come in WiFi, 3G, and 4G options.

The pricing seems very competitive. The Apple iPad 2 also has a starting price of $499, and the Motorola XOOM tablet which looks awfully similar to the Galaxy Tab 10.1 on paper runs $599 and up — although I wouldn’t be surprised to see that price fall by the time Samsung’s new tablet hits the streets in June.