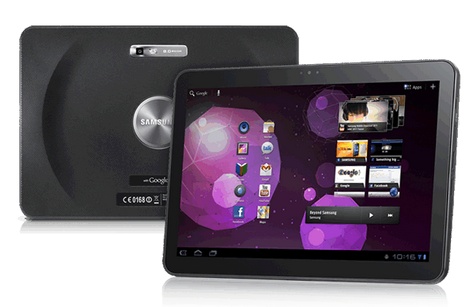 At a press event today Samsung unveiled a new 8.9 inch tablet and an updated version of the Samsung Galaxy Tab 10.1 which the company claims will be the thinnest large screen tablet available. Measuring just 8.6mm thick, it’s a hair thinner than the 8.8mm Apple iPad 2.

But when Samsung first introduced the Samsung Galaxy Tab 10.1 at Mobile World Congress in February, the company said it would have a 10.9mm case. So what gives?

Well, it turns out that Samsung went back to the drawing board after Apple introduced the iPad 2, and figured out how to make the tablet a little thinner. But rather than simply scrapping all the work that went into the original design,it looks like at least some 10.9mm units will ship.

SlashGear reports that European wireless carrier Vodafone will offer the original Samsung Galaxy Tab 10.1 soon. That model will be called the Galaxy Tab 10.1V and aside from being thicker than the new model, it will also have a higher resolution camera. The Galaxy Tab 10.1 has a 3MP rear camera, while the 10.1V has an 8MP camera.