Samsung is expected to introduce a range of new products at Mobile World Congress this month, including a next-gen Galaxy Gear smartwatch, the Samsung Galaxy S5 smartphone, and maybe some new tablets. But it looks like the company also has some big announcements for smaller products: new Samsung Exynos processors are on the way. 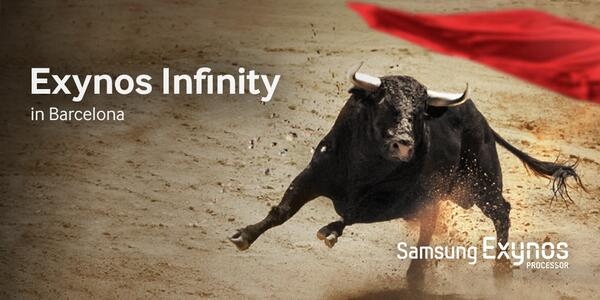 Details are a bit thin at the moment, but Samsung posted a teaser on Twitter promising its “latest innovations,” along with a picture with “Exynos Infinity” on it.

It’s likely that this next-gen Exynos chip for phones, tablets, and other devices could be Samsung’s first 64-bit processor based on ARMv8 architecture. Korean website Chocoberry spotted some Linux kernel patches for an unannounced Samsung GH7 chip with those properties.

Right now Apple’s A7 processor is the only 64-bit ARM-based chip, but pretty much every major ARM chip maker is working to make the move from 32-bit to 64-bit and it’s no surprise Samsung wants to be one of the first.

It’s not clear what products would be powered by that new processor. But it looks like the Exynos Infinity (or whatever it’s called) might not be the company’s only new processor.

This 6-core chip is still be based on 32-bit, ARMv7 architecture and joins Samsung’s existing Exynos 5 chips like those found in the company’s Galaxy S4 smartphone, Samsung Chromebook, and Google Nexus 10 tablet.

11 replies on “Samsung Exynos Infinity chip on the way”