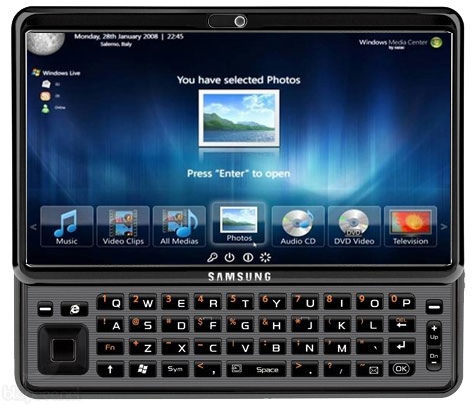 There’s a rumor making the rounds that Samsung is preparing to launch a new 10 inch tablet in March or April. While the company’s best known tablet at the moment is a 7 inch model called the Galaxy Tab, which runs Google Android, the upcoming model would reportedly be a Windows 7 tablet.

But that’s not that unusual. There are plenty of touchscreen tablets with Windows 7. What makes the rumored Samsung Gloria different is that it would have a sliding keyboard, possibly similar to the ones found on slider-style smartphones, except, you know, bigger.

There’s no word on pricing, specs, or much of anything else, and right now all we have to go on are some anonymous sources that have tipped off Pierre at Blogeee.net, but Pierre has a pretty good track record of only posting rumors that are plausible… and over the past few years a number of products I’ve heard about first at his site have eventually found their way to market.

That said, the image above is not an official picture, but rather an artist’s rendering, courtesy of Blogeee.