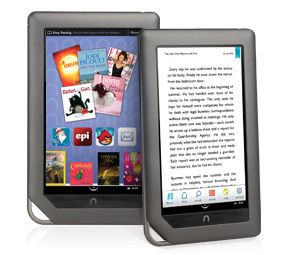 Nate at The Digital Reader hears that Barnes & Noble will hold an event on November 7th, and that the company could be ready to unveil its next-generation NOOK Color.

Seriously, I know Nokia generated a lot of excitement by dropping Symbian and launching a new line of smartphones running Windows Phone 7, but something tells me Barnes & Noble isn’t about to follow suit — especially since Microsoft only licenses WP7 for phones. I just thought it was kind of funny that both of these events are happening on the same day.

The original NOOK Color is an eBook Reader with a 7 inch color LCD display. It runs a version of Google’s Android operating system and can run a number of third party apps. If you root it you can also use the NOOK Color as a full-fledged Android tablet, which has made the $250 tablet rather popular with tinkerers.

But a lot has changed since the NOOK Color hit the market last year. Recently Amazon and Kobo introduced new color tablets which will be able to run third party apps, play audio and video, and display eBooks. Both of those devices will sell for about $200.

It’s not yet clear how Barnes & Noble plans to spruce up its second offering, but if the company wants to hang onto its early lead in the color eBook Reader/tablet space, the NOOK Color 2 is going to have to be either cheaper or way cooler than the Amazon Kindle Fire.

Update: Yup, Barnes & Noble is holding an event on November 7th. And in case you missed it, I only threw in the coincidental timing of the Windows Phone 7 event as a joke. The odds of Barnes & Noble moving away from Android at this point are pretty slim.