Google is probably working on at least two Nexus devices this year, and it’s likely that the upcoming “Sailfish” and “Marlin” smartphones will ship with Android 7.0 Nougat software.

But according to Android Police, that won’t be the only thing that’s new: Google is said to be working on a new home screen/launcher which may be available exclusively for Nexus devices at launch. 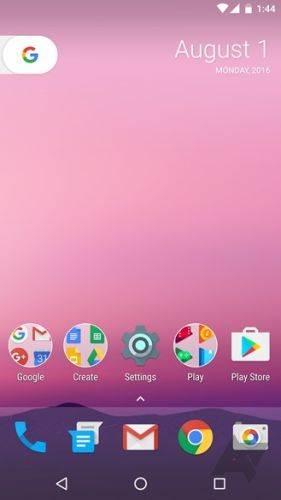 Instead you can dock 5 app icons on the bottom of the screen, and there’s a small up-arrow above them. Swipe up and you can bring up the app drawer to view all of your apps and a search bar. Or you can just touch the up arrow if you’d prefer not to swipe.

You can exit the drawer by hitting the back button or swiping down.

Android Police says there’s also no longer a search widget on the home screen, but there is a small G icon that you can tap to open a search bar. The leaked version is probably an early version of the Nexus launcher, and the final product may include additional functionality, such as Google Assistant integration.

You can find animated images and additional details at Android Police.