As expected, the Raspberry Pi foundation has launched a new version of their low-cost single-board computer. The new Raspberry Pi 3 Model B is a $35 computer with a 1.2 GHz ARM Cortex-A53 quad-core, 64-bit processor, built-in 802.11n WiFi and Bluetooth 4.1, and a design that makes it fully compatible with accessories and software designed for older Raspberry Pi devices. 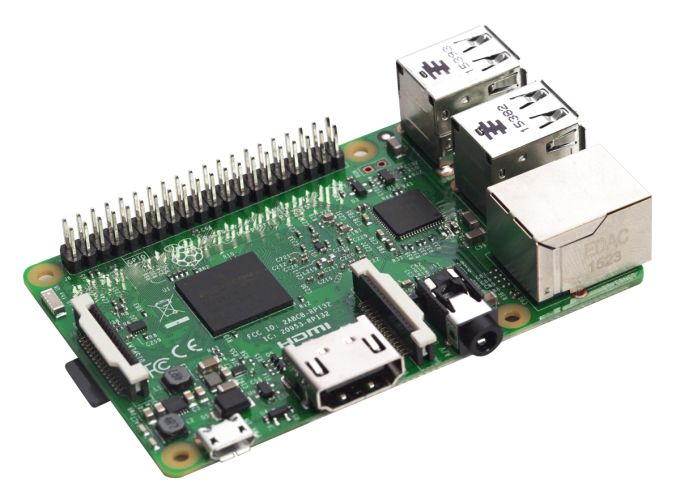 The original Raspberry Pi mini-PC launched in 2012, and the foundation had initially planned to focus all its efforts on that device until 2017 or so… but the falling costs of components and several other factors made it possible to launch a version with a quad-core processor and more memory in 2015 without increasing the price.

The new model for 2016 continues in the tradition of packing more features into the computer while continuing to sell it for the same price.

You can pick up the Raspberry Pi 3 Model B from Element14 or RS Components for $35.

We’re also starting to see the Raspberry Pi 3 showing up in other places. The makers of the Kano computer kit for kids, for example, are taking pre-orders for a new kit based on the Raspberry Pi 3 (which also includes a keyboard, speaker, and other accessories designed to fit together).

Raspberry Pi’s third-generation computer features a Broadcom BCM2837 processor that the foundation says offers a performance improvement of up to 60 percent over the Raspberry Pi 2. The Raspberry Pi 3 is said to be about 10 times faster than the first Raspberry Pi computer.

Element14 also has an article outlining the results of several benchmark tests.

Interestingly, while the new model has a 64-bit processor, at launch it will work with 32-bit operating systems such as Raspbian. The Raspberry Pi Foundation hasn’t yet decided whether to put resources into developing 64-bit software for the Raspberry Pi 3… although I suspect it won’t take long for independent developer to give it a try.

But the new model has a Broadcom BCM4348 wireless chip in addition to the new processor, and the LEDs have been moved so that an antenna could fit on the board.

The Foundation does now recommend using a 2.5A/5V power adapter rather than a 1.8A adapter in order to provide more power to the USB ports.

There are plans to update the entry-level Model A+ later this year with a new Raspberry Pi 3 Model A+.

While that covers the primary lineup of computers from Raspberry Pi, there are two other devices the group makes: the $5 Raspberry Pi Zero and the Raspberry Pi Compute Module. The $5 model will likely continue to be available for a while and features the same processor as the 2012 version. There will be a new Compute Module 3 based on the Broadcom BCM2837 64-bit chip soon, for folks that want to build their own products based on the Raspberry Pi 3 hardware. That version is expected to launch within the next three months.