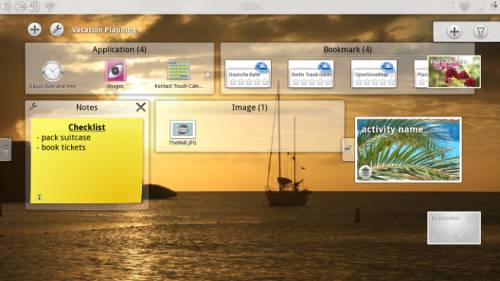 A team of developers working on the KDE desktop environment have released the first version of a new user interface designed for touchscreen tablets. It’s called Plasma Active One, and the new customizeable user interface is organized around the idea of “Activities.”

Instead of an application launcher with a series of shortcuts to apps, the Plasma Active One home screen features a series of widgets which you can fill up with browser bookmarks, pictures, application shortcuts, or interactive widgets that provide information such as weather forecasts. When you swipe your finger from the side of the display a list of other Activities shows up, allowing you to essentially switch between multiple desktops. You can also create a new activity from this menu.

The reason the developers call these virtual desktops Activities is that you can use them to arrange different sorts of projects. One can be dedicated to a work project, for instance, while another might feature photos of your dog doing silly things.

At the top of the screen is a status bar, which you can drag-down to see thumbnail icons of apps that are currently running. You can click any of these apps to switch between programs, or click the X next to each icon to close an application. You can also drag further down the screen to view a more complete list of apps on your device, along with a search box.

As more and more computers and mobile devices with touchscreen displays hit the streets, we’re likely to see a growing number of touch-friendly user interfaces arise. This… is certainly one of them. 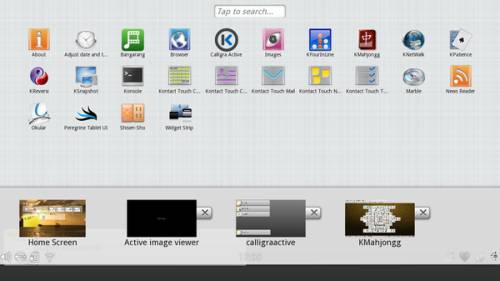 I’m not convinced the focus on Activities is all that useful, but I kind of like the swipe-for-recent-apps, and swipe-again-for-all-apps idea. Or maybe I just like the way it looks.Either way, it’s good to see developers working on touch-friendly interfaces for Linux tablets outside of the MeeGo and Tizen communities.

You can try out Plasma Active One by downloading and booting a live image on a USB flash drive or by using a virtual machine.