There’s no shortage of apps that let you run desktop software on an iPad by logging into your Windows or Mac computer and remotely controlling it from your iPad. The problem is that most desktop apps such as Microsoft Office, Firefox, or Internet Explorer may not have been designed for touch-based navigation.

Parallels Access aims to solve that problem by “Applifying” desktop software, letting you use desktop apps as if they were native iPad apps. 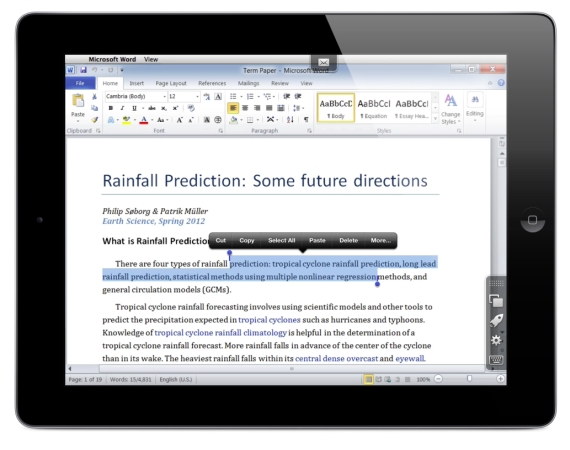 Parallels has been offering virtualization and remote desktop software for years, making it easy to run Windows on a Mac or login to your PC from your iPhone, among other things.

What makes Parallels Access different is the way it makes your desktop apps work like native mobile apps. Instead of viewing your PC desktop when you launch the app, for instance, you’re greeted with an App Launcher showing shortcuts for your desktop apps. It looks a lot like the iPad home screen.

Once an app is up and running, you can use familiar gestures including pinch-to-zoom and swipe-to-scroll, even when using software that doesn’t normally support those gestures. You can also use iPad’s native select, drag, copy and paste actions and use the iPad keyboard to enter text.

There are still a few caveats. First, you’re not really running Microsoft Word on your iPad if you use Parallels Access. It’s still running on your computer and you’re simply remote controlling it from your tablet. That means if your PC is turned off, you can’t access Outlook, Word, Excel, or whatever other app it was you were trying to run.

There is a 14-day free trial for the Parallels Mac Agent, and the Windows Agent is currently in beta, and will be free to use until it exits beta.