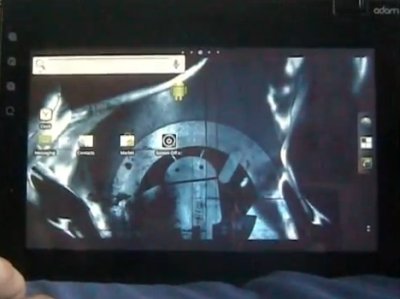 The Notion Ink Adam tablet probably received more attention from the geekier side of the blogosphere last year than any tablet aside from the Apple iPad. On paper it’s one of the most exciting things to hit the streets in ages: a 10 inch tablet with a dual core NVIDIA Tegra 2 processor, an optional Pixel Qi outdoor readable display, a removable battery, and a single camera that rotates to point forward or back.

In practice, the Adam tablet has been in short supply, early customers haven’t been that impressed with the screen quality, and the custom software that runs on the tablet is interesting, but arguably not as useful as the standard Android experience.

Users have been rooting Adam tablets and running the stock Android software since day one. Now DJ_Steve at the xda-developers forum has ported the popular CyanogenMod 7 custom Android operating  system to run on the tablet.

CM7 is based on Google Android 2.3.3 and the custom firmware supports most of the tablet’s hardware — but audio doesn’t seem to stream ove ran HDMI connection and there’s a bug affecting sleep and wake performance. That said, the custom kernel supports overclocking, allowing you to run the tablet at speeds up to 1.4 GHz just like the ViewSonic gTablet which has the same NVIDIA Tegra 2 processor.

Now if only Notion Ink would open up another round of orders… and maybe replace the 1024 x 600 pixel display with a higher resolution 1280 x 800 screen.

You can check out a video of the Adam running CM7 after the break. The video’s nearly a week old and DJ_Steve has already launched several updates since shooting it.