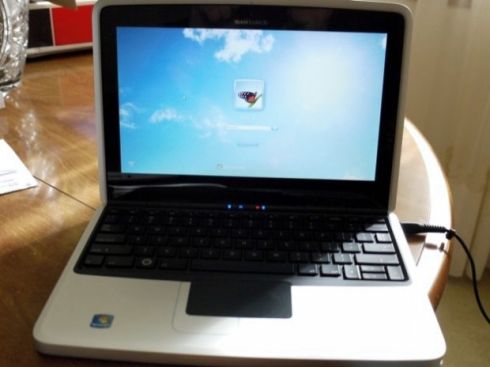 The Nokia Booklet 3G is one of the most interesting netbooks to hit the market this year. It’s the first netbook from Nokia, a company best known for producing cellphones. And it’s available with an integrated 3G modem for connecting to AT&T’s wireless broadband network. It also has Bluetooth, A-GPS, HDMI output, and a 1280 x 720 pixel, 10 inch display. Those are all premium features that you don’t find on all netbooks, and I don’t think there’s another netbook that mixes them all together into one tidy package.

But there’s a down side. The laptop has a slow 1.6GHz Intel Atom Z530 processor, and a high price tag. It costs $599 without a contract, or $299 when you sign up for a 2-year plan with AT&T. Considering you can pick up a dozen other netbooks for about $300 without a contract, this thing had better be pretty spectacular in person, right? Well, unfortunately it’s just not.

We already heard from the Wall Street Journal that while the Nokia Booklet 3G has a nice screen, the keyboard is somewhat cramped. Now CrunchGear has published a review. And they found exactly what I would have expected: The Booklet 3G feels sluggish.

That’s because while the 1.6GHz Intel Atom N270 CPU can handle most basic tasks like web surfing and multitasking, the slower Atom Z5xx is just barely up to the task. That’s what I discovered when reviewing two different laptops with the similar (but slightly slower) Atom Z520 processors: The Asus Eee PC T91 and the Asus Eee PC 1101HA.

CrunchGear reports that it takes longer for web pages and YouTube videos to load on the Booklet 3G than on other netbooks. On the bright side, the battery does appear to be good for 10 or more hours of run time. That’s what happens when you put a slow, low power CPU in a computer like this.

Update: Laptop Magazine has published a detailed review as well, and the long and short of it is that the netbook gets great battery life, but performs slowly due to the sluggish processor and slower than average 4200 RPM hard drive.