Microsoft is working on two new versions of Office, and both are expected to launch before the end of the year.

Office 2016 is the next version of the company’s popular desktop office suite of apps. But there are also new touch-optimized Word, Excel, PowerPoint, OneNote, and Outlook apps for phones, tablets, and other touchscreen devices. Microsoft calls that new software Office for Windows 10. 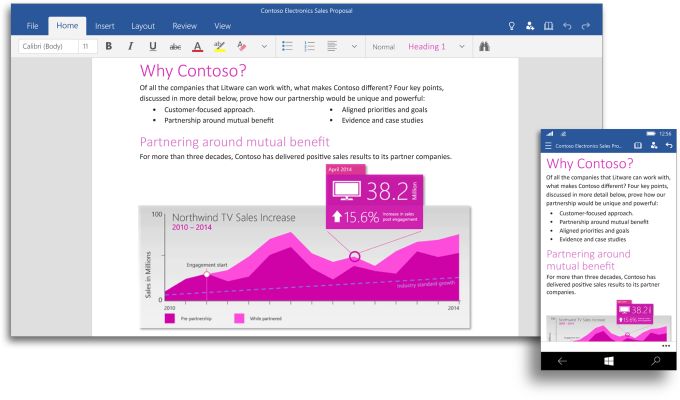 The new touch-friendly apps are Universal Windows Apps, which means they’re designed to run across a range of devices with different screen sizes and processor types. The version of Excel that will run on smartphones will be pretty much the same as the software that runs on tablets.

Microsoft already makes a mobile version of Office available to Windows Phone users for free, and Office for Windows 10 will continue to be free… for some devices. The office suite will come preloaded on phones and small tablets that run Windows 10.

If you want to runt the software on larger tablets or on notebooks, it’ll be available for download from the Windows Store, but Microsoft isn’t promising it’ll be free for users of those devices.

A preview of Office for Windows 10 will be available for folks running the Windows 10 Technical Preview within a few weeks.

Office 2016, meanwhile, is the successor to Microsoft Office 2013. It’ll be a more full-featured app designed for use on devices that have a mouse and keyboard.

Microsoft isn’t ready to say much about what new features will be included yet, but the company is promising that the software will be ready to launch in the second half of 2015. It’ll also likely include apps such as Access that aren’t available in Office for Windows 10.

One reply on “Next versions of Microsoft Office coming in 2015”