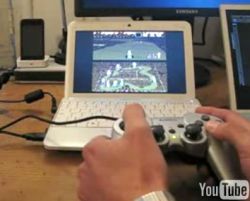 Sure, some folks buy laptops because they want to be able to get work done while on the go. But others have less serious goals in mind. After all, why should you be chained to your desktop when you want to play Call of Duty?

It turns out that most modern netbooks with Intel Atom CPUs are more than capable of running games, even games that require some 3D acceleration. No, you’re not going be able to play a bleeding edge game like Crysis without dropping a few frames. But plenty of games will run just fine. And in general, the older, the better.

With that in mind, the folks at Wired’s Gadget Lab decided to throw a Super Nintendo emulator on an MSI Wind netbook, plug in a USB joystick, and play some Mario Kart and Street Fighter II. The results? Pretty awesome. Basically it’s like having an SNES to go in a box that’s smaller than the original SNES game system. Check out the video for yourself after the break.

Of course, it should come as no surprise that you can run an SNES emulator on a device with a 1.6GHz CPU. After all, there are a couple of decent SNES emulators that run well on PDAs with 400MHz or slower processors.

But there’s one thing no PDA that I’m aware of can handle: a PS2 emulator. Sascha at Eee PC News.de dug up a video of one user playing Final Fantasy X on an Eee PC using a PS2 emulator. I have to say, playback isn’t nearly as smooth as with the SNES emulator. It looks like the game is running at half speed, at best. But it’s still pretty.