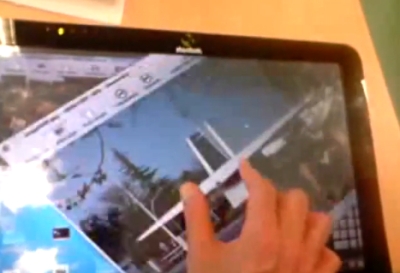 Microsoft is baking support for multitouch gestures into Windows 7, and that means we’re likely to see a growing number of laptops, all-in-one dekstops, and netbooks with capacitive touchscreen displays starting in the second half of 2009. But it looks like the fun isn’t going to be strictly limited to Windows. because a group of Linux developers are showing a proof of concept demonstration fo multitouch support for Linux.

The technology works with the Linux 2.6.30 kernel and includes support for common multitouch gestures including swiping, flipping, rotating, and resizing. You can perform actions like switching virtual desktops, or drawing pretty bubbles on the screen. OK, I know that one is completely pointless, but the folks behind the project spend a fair amount of time in the video showing bubbles in the demo video which you can find after the page break.

This is good news for Linux netbook fans for two reasons. First, it means it’s possible we’ll start to see multitouch features included in future versions of popular Linux distributions including Ubuntu or Moblin which may come preinstalled on some netbooks. But if that doesn’t happen, you’ll probably be able to snag a touchscreen netbook designed to work with Windows 7 and load your own Linux distribution to take advantage of the multitouch display.