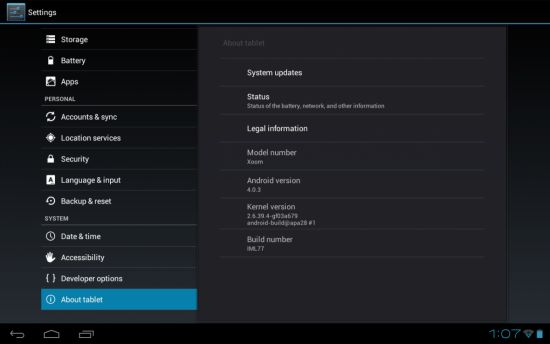 Motorola has started rolling out an Android 4.0 software update for the XOOM WiFi tablet. The XOOM was the first tablet to ship with Android 3.0 Honeycomb when Motorola released the device last year. Now it’s the second existing tablet to receive an over-the-air Android 4.0 update.

Google’s latest operating system includes a refined user interface and a new system-wide font as well as spell checking, a new contacts app, and the ability to remove apps from your “recently used” menu. Android 4.0 is also the first version of Google’s mobile OS designed to run on both phones and tablets which means many new apps designed for phones such as the Samsung Galaxy Nexus should also be able to run smoothly on tablets like the XOOM.

XOOM users should receive a notification when the update is available, but you can also check for the update by going to the Settings menu, choosing the About tab, and tapping the System Updates item.

One reply on “Motorola releases Android 4.0 for the WiFi XOOM tablet”