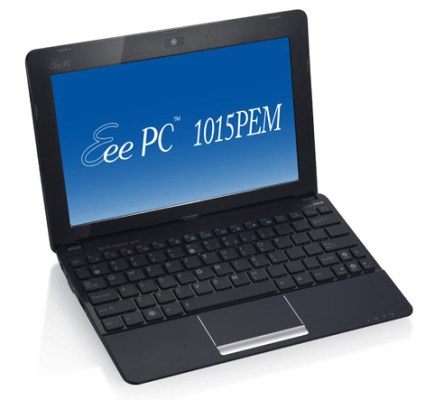 Someone at Asus appears to have hit the wrong button this morning. While the company hasn’t officially announced its upcoming Eee PC 1015PEM netbook with a dual core Intel Atom 550 CPU yet, reports of its existence started making the rounds yesterday. Then sometime this morning, the official product page went live… briefly. It’s now missing, but you can still see a listing for the Eee PC 1015PEM in the “all products” page at Asus.com.

The folks at Notebook Italia caught a glimpse of the page before it disappeared. It looks like in addition to the 1.5GHz Intel Atom Dual Core N550 processor, the netbook has a few other new features, including support for DDR3 memory, Bluetooth 3.0, and USB 3.0.

Asus will apparently offer three different battery options, including a 48Whr, 56Whr, and 63Whr hour battery, which the company claims should be good for up to 10, 11, or 13 hours of run time, respectively.