French startup Miraxess plans to begin shipping its Mirabook laptop dock for smartphones in March, 2018. It’s a device that looks like a laptop, but which is powered by your smartphone, giving you a way to use a touchpad, keyboard, and display.

But now Miraxess is introducing another way to do that: Mira PC Mode for Android. Basically it’s an app that lets you get a desktop-like experience with or without a special dock.

You’ll want to use a cable to connect your phone to a monitor though, and you’ll probably need a Bluetooth mouse and/or keyboard.

Miraxess says Mira PC Mode should be available in January, and it’ll be a free app for Android phones (although there will be some in-app purchases if you want to unlock some premium options).

Update: Miraxess tells me the app will show up in the Play Store as OXI, and it’s being developed by the company’s partner, Auxens. 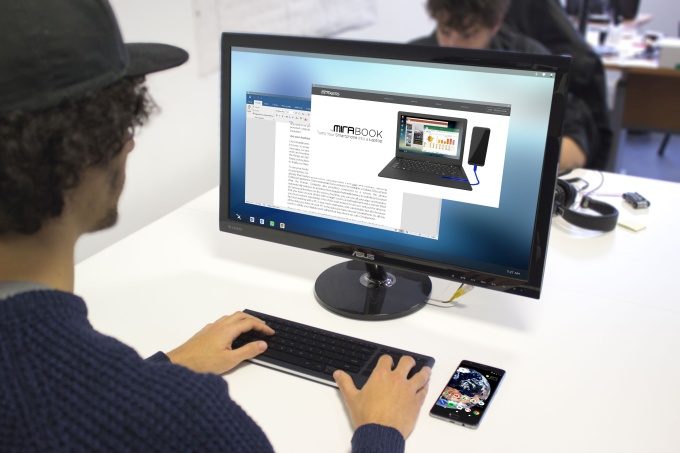 Basically the OXI app will be a version of the software that lets you use your phone with the upcoming Miraxbook laptop dock. In addition to launching in the Play store, Miraxess says the companies are talking to phone makers about the possibility of preloading the app on phones to offer out-of-the-box support for a desktop mode.

Oh, and I guess there’s one other thing you’ll need: the desire to actually use your phone as a PC. It’s a nifty concept… but it’s also one that’s been around for a few years, and which hasn’t really taken off yet.

Sentio Desktop offers a similar desktop mode (and Sentio’s upcoming Superbook is also a lot like the Miraxess Mirabook). Samsung’s DeX dock offers similar functionality for the company’s latest flagship phones. And Microsoft’s Continuum for phone feature lets you do it with (some) Windows 10 smartphones (assuming you can find one).

I can certainly imagine a future where our phones become our primary PCs, which would eliminate the need to sync data between devices or install multiple versions of the same app. But right now they’re kind of underpowered for that, and it probably makes more sense for most folks to use a desktop or laptop for work and a phone for staying connected on the go.