Want a new PC, but don’t want to run the latest Windows software? There are plenty of free and open source alternatives including popular GNU/Linux distributions such as Ubuntu, Fedora, Debian, and Linux Mint.

Want to run nothing but free and open source software? That’s a bit trickier, since most recent laptops, desktops, and tablets ship with chips and other hardware that rely on closed-source, proprietary bootloaders and other components.

For most folks, it probably makes sense to go with a do-the-best-you-can approach and use a proprietary UEFI or BIOS with some proprietary bits in order to load Ubuntu or another Linux distro. But for folks that are really serious about running “free software,” there’s an alternative called Libreboot which is 100% free software.

There’s just one catch: it currently only runs on a handful of computers, most of which were released more than 10 years ago. But if you want to buy a sorta/kinda new machine that runs Libreboot, a company called Minifree sells a handful of models that are basically repurposed old Lenovo ThinkPads that ship with Libreboot and the Trisquel GNU/Linux-based operating system (which is also 100% free software). 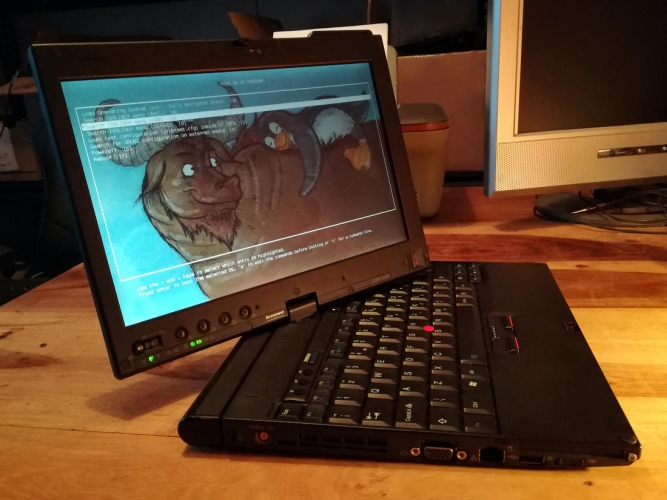 Minifree has upgraded the display with an IPS panel and the company has added a built-in Wacom tablet with pen support, allowing the computer to be used for drawing and graphic design.

There’s also a Libreboot X200 notebook for folks that don’t need the Wacom tablet functionality, and a Libreboot T400 for those who want a larger, 14 inch display. But the tablet model is the newest.

The system features an Intel Core 2 Duo SL9400 processor based on the company’s Penryn architecture. It won’t offer the same level of performance you can expect from more recent chips, but it is a 64-bit processor that should be able to run a wide range of software. This is still a laptop/tablet only a free software enthusiast could love.

In fact, Minifree is one of the only companies to sell PCs that are endorsed by the Free Software Foundation, and while certification for the new X200 Tablet is still pending, it’s very similar to the already-certified X200 laptop, so there’s a good chance this system will make the list.

If the old hardware is still giving you pause, I should point out there are a few other nice things about this device:

But you can configure the system with up to 8GB of RAM and up to 2TB of storage (there are options for up to 2 x 1TB hard drives or a 1TB HDD + a 480GB solid state).

If you’re clearly outside the target market for this device, but you’re curious to know what folks who value free software think, this reddit/r/linux thread is a good place to start.