The Mini X is a palm-sized device which is marketed as a set-top-box running a custom version of Google Android 2.3.4. You can hook it up to a TV to stream music or movies over the internet, surf the web, or perform other activities.

But like the MK802, Mele A1000 and a growing number of miniature devices with ARM-based processors, the Mini X is basically a small PC that just happens to be sold as a media player. 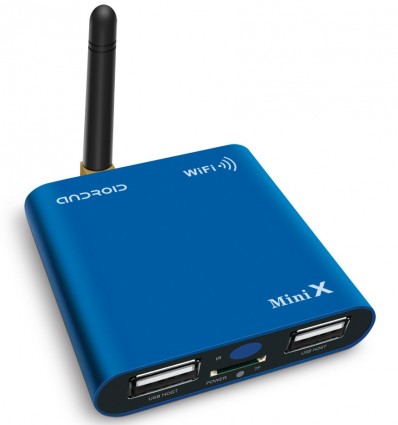 For that price you get a Mini X with an Allwinner A10 ARM Cortex-A8 processor, 512MB of RAM, and 4GB of storage. The device runs Google Android 2.3 and has a custom user interface designed for use with an IR remote control — which also comes in the package.

The Mini X features 802.11b/g/n WiFi and has 2 USB ports, a microSD card slot, and an HDMI port. It can handle 1080p HD video playback in a variety of formats.

While the box is designed to run Google Android, I wouldn’t be surprised if it’s also capable of running Ubuntu or other Linux-based operating systems. We’ve seen Ubuntu ported to other devices with Allwinner A10 chips in the past.

viaCNX-Software and Lowyat forum (for the blurry demo video)