So here’s something I never thought I’d be writing: Microsoft’s newest operating system is Linux-based.

Today the company introduced Azure Sphere, a new solution designed to bring better security of Internet-of-Things (IoT) gadgets including smart cars, smart kitchen appliances, and just about anything connected to the internet that’s not a traditional PC.

What’s unusual is that rather than run a version of Windows on those devices, Microsoft developed an Azure Sphere OS featuring a custom Linux kernel, marking the first time Microsoft has basically launched its own Linux distribution.

Sure, you’re not going to be running this on a PC, or even a server anytime soon. But we’ve come a long way from the company’s old “embrace, extend, extinguish” roots. Well, maybe. 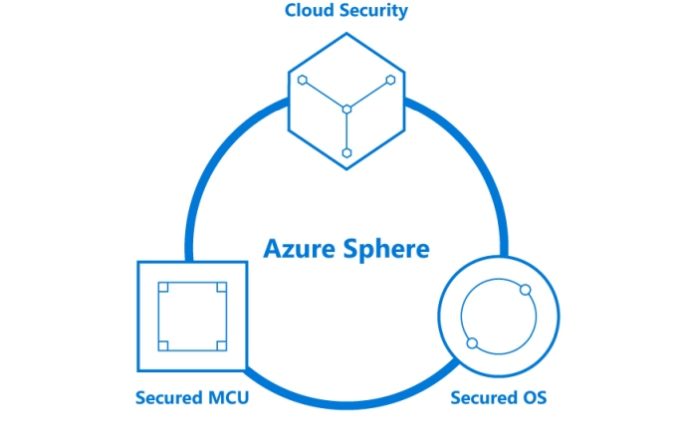 Microsoft says the goal is to be able to offer “security protection for a 10-year lifetime of the device.”

The company plans to license the MCU designs to chip makers and the Azure Sphere cloud service can work alongside other cloud-based services utilized by a device. So a company like Amazon could theoretically continue to use its own cloud services to power the smart speaker/voice assistant services on its Echo products while tapping Microsoft’s solution for keeping the gadgets secure (note: I do not necessarily expect Amazon to do this, but it’s the sort of thing that other companies could do).

MediaTek is the first company to announce an Azure Sphere chip, the MT3620 processor featuring a 500 MHz ARM Cortex-A7 application processor and two ARM Cortex-M4F subsystems, among other features.

During the Azure Sphere announcement, Microsoft’s Brad Smith noted that it was unusual for the company to be distributing software built around a custom Linux kernel, but that sometimes the best solution for a specific product category isn’t necessarily a Windows-based operating system.

There are a few ways of looking at that.

You could take Smith’s statement at face value and accept that full-fledged Windows is overkill for IoT devices (even though the company already has a Windows 10 IoT Core SKU that’s already pretty slimmed down to run on exactly the sort of devices we’re talking about).

You could figure that Microsoft wants to release something that’s compatible with a lot of existing IoT devices, which are already using Linux-based software, and which developers will be able to adapt to quickly.

Or maybe you could assume that this is the new Microsoft… the one that’s not afraid of Linux… the one that even includes a Linux command line terminal in Windows 10.

So maybe Microsoft decided it would be less work to adapt the technology that’s already used by most IoT device makers rather than try to fit a Windows peg into a square hole… particularly one that isn’t already widely used by device makers.

On the other hand, maybe Microsoft’s recent friendliness to Linux isn’t so much an effort to embrace the platform… as to get Linux users and developers using Microsoft’s software and services (including Windows 10, Azure Cloud, and other software… particularly the type Microsoft can charge subscriptions for on an ongoing basis).

As for Microsoft’s promises of better security for IoT devices, I have to say, I like the idea of at least 10 years of security updates… but in some situations I still prefer devices that don’t need updates at all.

My laptop automatically installs security updates. My phone does too… for now. In a few years, it probably won’t, because even Google typically only offers up to 3 years of official updates for its own Android phones. Third-party phone makers have an even worse track record.

Buy a smart refrigerator, TV, or speaker today, and you’re kind of playing the lottery with updates… which is disappointing when it comes to the types of gadgets you probably aren’t going to replace every few years.

Refrigerators typically last for more than a decade and aside from replacing a light bulb every now and again, the only thing you have to worry about with a “dumb” model is the expiration on the yogurt in the back, or the spinach that somehow turned to goo in the crisper. Get a smart fridge and maybe it’ll be vulnerable to hackers in a few years when it stops getting security updates (or when a zero-day exploit is discovered), allowing someone to remotely spy on your home over the internet.

So yeah, 10 years of updates is a step in the right direction… but even that might not be good enough.

But it might provide a clue as to why Microsoft is cool with releasing a Linux-based operating system rather than trying to cram a Windows square peg into an IoT round hole.

Over the past few years, Microsoft has been shifting its business model from one that relies on one-time sales of software like Windows and Office to one that brings recurring revenue from subscriptions to things like Office 365 and Azure services.

In that light, the company’s decision to release a Linux-based OS isn’t all that surprising. Microsoft doesn’t really care if you’re using Windows, Linux, Android, or iOS anymore… as long as you’re running Microsoft software and services on top of it.

If Azure Sphere takes off and you start to see lots of IoT products with 10-years of security updates delivered by Microsoft, somebody’s probably going to have to pay for the cloud services side of things. And when I say someone, I mean probably you.

That’s true whether you pay a high price up front for an IoT gadget that comes with a decade of “free” updates or spend less money on something that requires a paid subscription to continue receiving updates. Either way, Microsoft’s getting paid.

I’d still be surprised if the company decided to use Linux for anything other than IoT devices anytime soon. But I’d be less surprised than I would have been a few years ago.

Microsoft says Azure Sphere-compatible hardware should hit the streets by the end of the year.

via Business Insider and VentureBeat