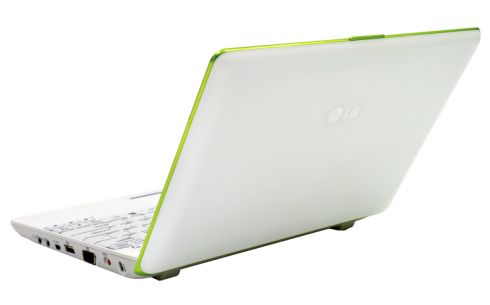 LG unveiled its next generation mini-laptop at Mobile World Congress yesterday. The LG-X120 follows on the heels of the company’s LG-X110 mini-laptop. The new model features an integrated HSPA modem, a 160GB hard drive, and Smart-On technology, which is basically LG’s “instant-on” interface that allows you to access some programs just a few seconds after hitting the power button without waiting for Windows XP or another OS to load fully.

The LG-X120 also uses “Smart-Link” technolgy that les you copy files to the computer from another machine using a USB cable. This can come in handy on a machine without an optical disk drive, and it kind of makes me wonder why it’s taken this long for someone to include this feature in a netbook.

The LG-X120 has a 1.3MP camera and comes with a 3 or 6 cell battery, which should provide 3.5 to 7 hours of run time, respectively. The laptop weighs 1.2kg or about 2.6 pounds. There’s no mention of the dimensions, or even the screen size in the official announcement. Somehow the LG-X120 name makes me think LG might be stretchign the definition of a netbook and offering a 12 inch model. But it’s more likely that this computer, which bears a more than passing resemblance to the MSI Wind U120, is just a modest update to the LG-X110 which means it has the same screen and processor.