The Lenovo Chromebook Duet is a 10.1 inch tablet that comes with a detachable keyboard cover that allows you to use the system either as a handheld Chrome OS tablet or a sort of pseudo-Chromebook.

First unveiled in January, the Chromebook Duet is now available available for purchase from Best Buy for $300. 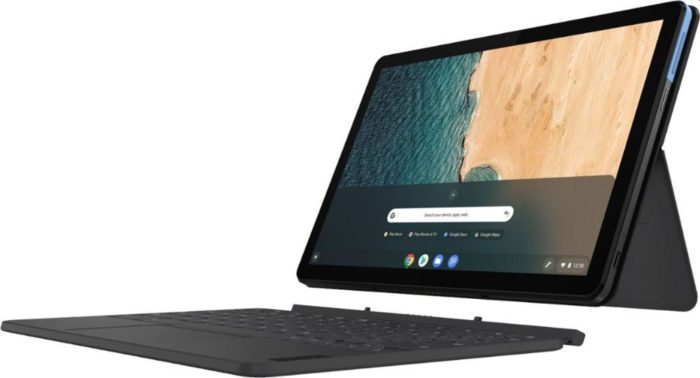 At those prices, the Lenovo Chromebook Duet is cheaper than an entry-level iPad or Surface Go 2, neither of which comes with a pen included. You could certainly argue that iPadOS and Windows are more useful tablet operating systems (since the iPad supports millions of tablet-friendly apps and the Surface Go supports… Windows apps). But Google’s browser-based Chrome OS has been getting more touch-friendly over time and now supports Android and Linux apps as well as native Chrome OS apps.

In terms of hardware, the Chromebook Duet’s features include:

Lenovo says the Chromebook Duet also works with an optional USI pen, but it’s sold separately. The tablet does not have a headphone jack, but it comes with a USB-C to 3.5mm audio adapter.

There’s also no SD card reader, which makes it worth at least considering shelling out the extra $20 for the model with 128GB of storage rather than settling for 64GB. But even 64GB is more than you get from many Chromebooks in this price range.