This summer as Sony and Microsoft were talking up their PS5 and Xbox Series X game consoles, something unexpected happened: a fast food company known for fried chicken released a teaser video for its own game console.

Plenty of people figured it was a joke.

And, I mean, it probably is. But KFC has followed through on that joke, and produced a game system shaped like one of the chain’s iconic buckets. It’s called the KFConsole, and it’s a gaming PC with enough horsepower for 4K gaming… and a special feature: a “chicken chamber” that uses the heat from the console to keep your chicken (or other food, I guess) warm while you’re gaming. 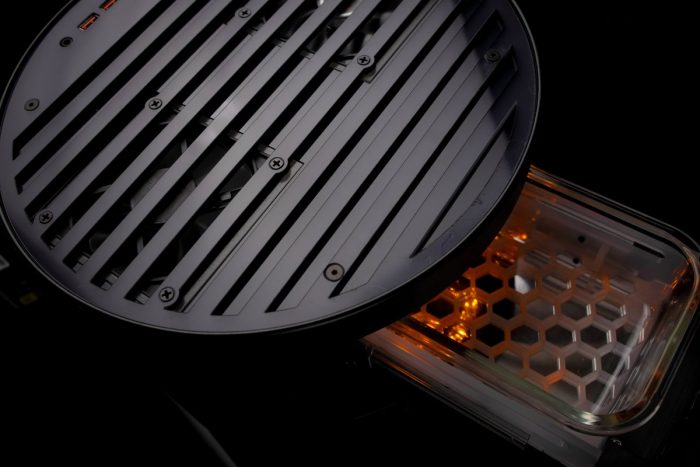 So here’s the deal. KFC partnered with PC hardware company Cooler Master and a PC case modder who goes by TimePlay to design the KFConsole.

The system is powered by an Intel NUC 9 Extreme Compute Element (the same computer module that works in Intel’s Ghost Canyon NUC) and it has a hot swappable GPU slot for a graphics card. According to the product website, the KFConsole uses an Asus graphics card. It’s unclear which Asus card, but KFC and Cooler Master say you can expect 4K gaming at up to 240 Hz.

For storage, the computer features two Seagate BarraCude 1TB PCIe NVMe SSDs, and the system has 32GB of RAM.

The chicken chamber is definitely the weirdest thing about the KFConsole (or maybe the fact that KFC designed a gaming PC is the weirdest thing), but in addition to keeping food warm, it’s actually part of the computer’s cooling system, since heat generated by the hardware needs to go somewhere, and in this case instead of just pushing it all out of the computer’s body, it makes a stop in the food chamber.

You can’t actually buy a KFConsole yet… but you might be able to at some point in the future. Tom’s Hardware reports that KFC and Cooler Master actually plan to bring this thing to market in the future. Pricing and availability details aren’t available yet.

The console wars are 𝒐𝒗𝒆𝒓.

14 replies on “KFC and Cooler Master introduce the KFConsole gaming PC (no, really)”