It still feels weird writing that a Linux distribution is something you can download and install from the Microsoft Store. But it’s been true for a while now. Windows 10 has an optional feature called the Windows Subsystem for Linux that lets you load a command-line Linux operating system that runs inside of Windows, allowing you to use Linux tools without rebooting or opening a virtual machine.

You can already install Ubuntu, OpenSUSE, or SUSE Enterprise Linux from the Windows Store.

Now you can also download and install Kali Linux. 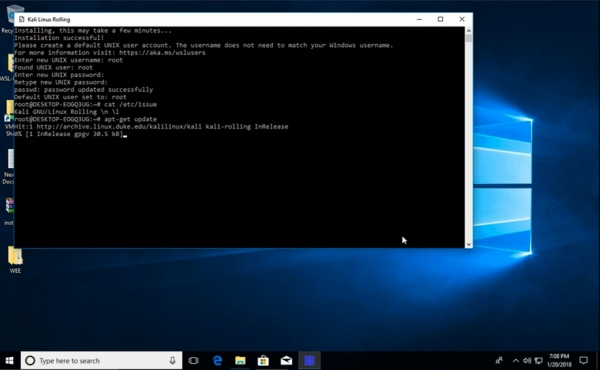 Kali Linux is an operating system designed to let security researchers conduct “penetration testing” and security training. Basically it’s something professionals can use to conduct security audits, although you don’t necessarily need to be an IT pro to use it.

Actually, that’s been true for a little while. In January the Kali team provided a tutorial for installing Kali on systems that support the Windows Subsystem for Linux. But now you don’t need to jump through all those hoops. Just search for Kali in the Microsoft Store or follow this link.