The first mobile PCs with foldable displays are set to ship this year, likely starting with the Lenovo ThinkPad X1 Fold with its 13.3 inch foldable screen. But Intel says it’s been hearing that some customers want an even larger display in a portable package — so the company developed a design for an even larger tablet.

It’s code-named “Horseshoe Bend,” and it’s a tablet with a 17 inch foldable display that folds in half to take up the same amount of space as a 13.3 inch notebook. 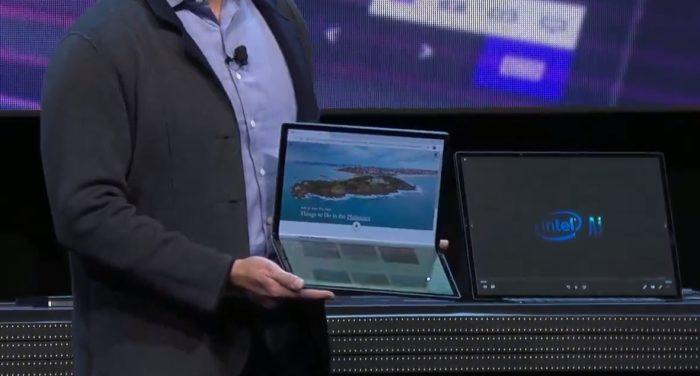 Intel gave a quick preview of the new form factor during the company’s CES keynote. We didn’t get a lot of details about the platform, but a prototype demo showed how it could be used in laptop style with the bottom of the device displaying a different app than you see on the top (or possibly an on-screen keyboard), or unfolded to watch a video in full-screen.

The Verge notes that the prototype has a 4:3 aspect ratio and a kickstand that lets you prop the whole thing up when it’s not folded so you can use it with a wireless keyboard.

It’s also said to be a fanless computer powered by a 9 watt Intel Tiger Lake processor. 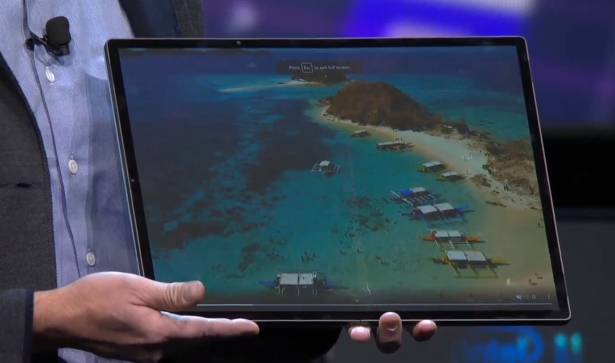 While Horseshoe Bend is just a reference design, and the version shown on stage was clearly a prototype (with a very, very glossy screen), it’s worth noting that Intel demonstrated the large-screen foldable tablet during a section of its keynote where the company was talking about its Project Athena initiative.

That’s the company’s effort to certify portable computers that meet a certain set of requirements when it comes to experience — such as 9+ hours of real-world battery life, the ability to resume from sleep in less than a second, and support for fast charging (with up to 4 hours of battery life from a 30-minute charge).

A bunch of PC makers have announced new “Project Athena” laptops this week using the language that they’re “co-engineered with Intel,” which suggests that not only is Intel certifying that these devices meet a set of requirements… the company is also working with device makers on the designs.

So don’t be surprised if we see a 17 inch foldable or two later this year.