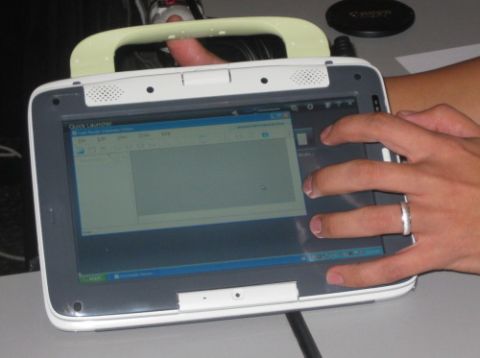 But the Classmate tablet PC or Classmate 3, or whatever it’s actually called (I’ve seen some conflicting reports about this), has many of the features you’ll find in commercial netbooks like the Asus Eee PC 901 or Lenovo IdeaPad S9 and then some. At its most basic level the computer Intel unveiled at IDF in San Francisco today has a 1.6GHz Intel Atom CPU, 1GB of RAM, an 8.9 inch, 1024 x 600 pixel display, and a solid state disk. But it also features a touchscreen display, a rugged case, and an accelerometer.

In other words, you can grab this little laptop by the handle and toss it around a bit without fear of breaking it. You can rotate the screen 180 degrees and use your fingers or a stylus to interact with the PC. And Intel even added palm recognition that lets you rest your palm on the screen while using your fingers to click, write, or draw.

The webcam has been modified to rotate up to 180 degrees for use in tablet mode. And Intel has developed a full screen application launcher that works with Windows XP to make it easy to start commonly used programs with your fingertips. The program launcher actually looks a lot like the Asus Eee PC easy mode, or the interface for Linpus Linux Lite or Ubuntu Netbook Remix.

You can check out a few videos of the Classmate tablet in action after the jump. No word on pricing yet, but this device’ll probably cost at least a few bucks more than the current generation Classmate 2 which runs around $400. The Classmate tablet should be available by the end of the year.