Microsoft’s Surface tablet may not be doing as well as the company hoped, but Intel is going full speed ahead on tablet processors. The chip maker intends to release five new Ivy Bridge CPUs for slate computers that feature low power consumption without, one hopes, a hit to performance. They will be available in the first quarter of 2013.

Perhaps it’s not a coincidence that the Surface Pro will also be out in the first quarter. It’s a good bet that these new chips may power that tablet and many other Windows 8 based slates, hybrids, and convertibles. 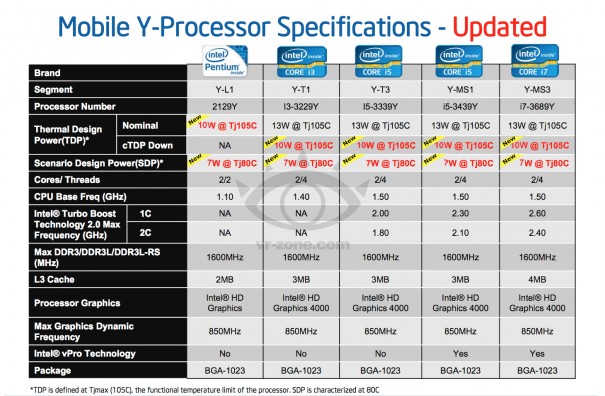 The new “Mobile Y” chips mostly have the new Core i branding with one lone Pentium in the mix and will clock in at 1.1 – 1.5 GHz. The Core i5 and i7 chips have Turbo Boost ability for overclocking up to 2.6GHz. Good news is that the Core i3, i5, and i7 models get Intel’s HD Graphics 4000.

Overall, these will be much more powerful than the Intel Atom CPU some Windows tablet manufacturers still employ, yet will hopefully get close to that chip’s efficiency.

Long battery life coupled with good performance is the holy grail, especially with tablets. And Intel has some catch up to do in this category when it comes to that balance. New ARM-based chips are on the horizon from Qualcomm, Samsung, and other big players. ARM processors can only run the RT version of Windows, which isn’t all that popular right now.

Intel’s x86 processors support full Windows 8, but apparently tablets with this operating system aren’t exactly flying off the shelf. Issues with the operating system itself aside, getting the performance/efficiency balance right can go a long way toward making tablets people will snatch up without hesitation.

It will be interesting to see the tablet crop that comes out early next year.