The Intel NUC P14E Laptop Element is a thin and light notebook computer with a 13.9 inch, 3000 x 2000 pixel touchscreen display, an aluminum body, and a modular design: the brains of the system are on an Intel NUC 11 Compute Element card that can be removed and replaced when it’s time to upgrade or repair a notebook.

Intel is positioning the NUC P14E Laptop Element as a solution for businesses, so it’s unclear if or when individual customers will be able to get their hands on one. But it’s the latest device to come out of Intel’s on-again, off-again love affair with modular computing. 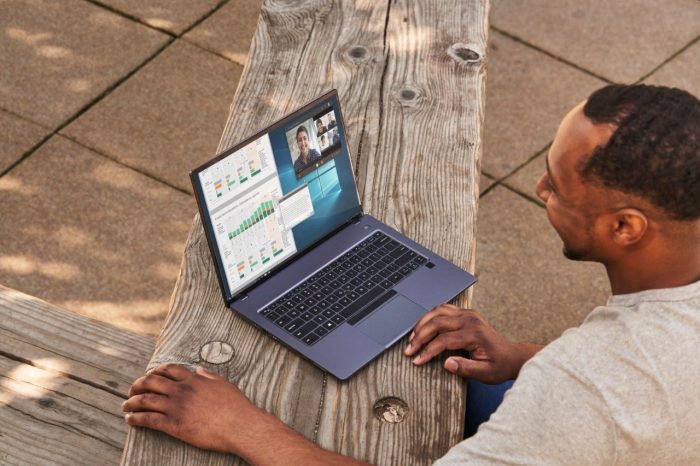 The NUC 11 Compute Element is basically a small card with processor options ranging from an Intel Celeron 6305 chip to a Core i7-1185G7 processor. Up to 16GB of RAM is also integrated into the card, as is the hardware to enable support for PCIe x4 Gen 3 storage, WiFi 6, Bluetooth 5.2, Gigabit Ethernet, and Thunderbolt 4 connectivity.

By putting that hardware onto a removable card, Intel offers customers the opportunity to pick the specs they need, while using the same chassis, display, keyboard, and ports across all configurations. And if you want to upgrade a notebook from a Core i3 chip to a Core i5 or Core i7 processor, a module can be removed and replaced without the need to buy a whole new computer.

Intel also says that while the NUC P14E Laptop Element is designed for use with NUC Compute Elements featuring 11th-gen Tiger Lake chips, it could also be compatible with next-gen modules featuring 12th-gen or later processors, although it remains to be seen whether the company will deliver on that promise.

One thing that’s not included on the NUC Compute Element is storage: the laptop has an M.2 2280 slot for PCIe x4 Gen 4 storage. 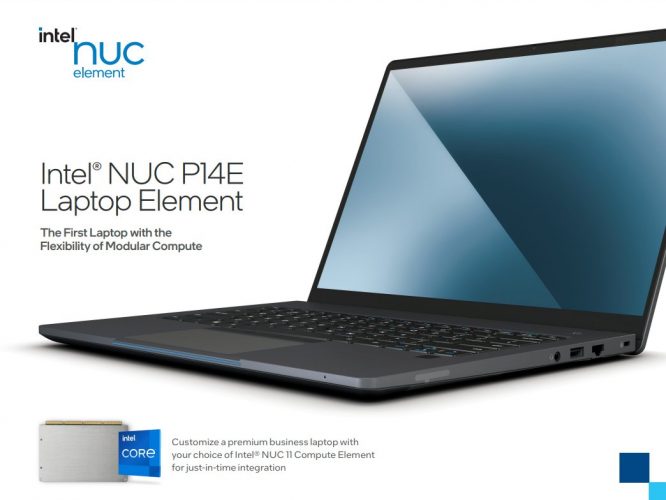 Intel’s NUC Compute Elements are also used in desktop computers like the Intel Beast Canyon gaming computer. But the company has been dabbling with modular computing for a while. Intel introduced a credit card-sized Compute Card in 2017, and it was expected to work in things like smart TVs, vending machines, mini PCs, and laptop docking stations. But it was never widely adopted, and Intel abandoned the project just two years later.

Whether the Compute Element sticks around longer will probably depend largely on how popular devices like the Beast Canyon NUC and Intel NUC P14E Laptop Element are with customers in the coming years.

via ComputeBase and Intel (PDF link)