Intel’s next compact computer with support for discrete graphics will be the NUC 12 Extreme, also known by the code name Dragon Canyon. The company provided some details during the Consumer Electronics Show, explaining that the system would support up to a 65-watt 12th-gen Intel Core i9 desktop processor and that it would ship in the first quarter of 2022.

Now we have an even better idea of what to expect thanks to a leaked spec sheet and retail listings that were published a little early (and then removed). 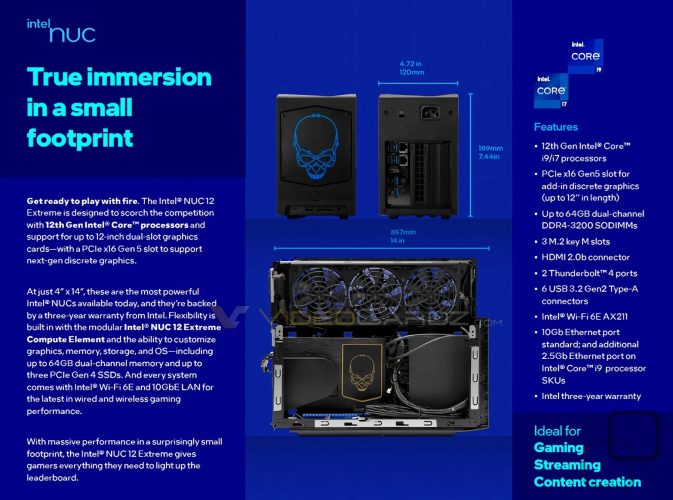 VideoCardz has published a leaked spec sheet that explains that the Beast Canyon NUC will measures 4.72 inches wide, 7.44 inches tall, and 14 inches long. Under the hood it has a PCie x16 Gen 5 slot for discrete graphics cards up to 12 inches long. And the computer is powered designed to work with a removable Intel Compute Element that features an LGA1700 socket with support for removable 12th-gen Intel Core desktop processors.

But Intel won’t sell the NUC 12 Extreme as a barebones, bring-your-own PC kit. Instead it’ll be available with a choice of Core i7-12700 or Core i9-12900 processors. The fact that the chips are socketed will likely make it easier for Intel to produce the Dragon Canyon NUC and/or for the company (and end users) to upgrade the chip down the road though.

According to the retail listings, prices could up to 25 percent higher than for the previous-gen “Beast Canyon” NUC 11 Extreme, although I’d take that with a grain of salt as the prices appear to have come from SimplyNUC, which often charges higher prices than other retailers.