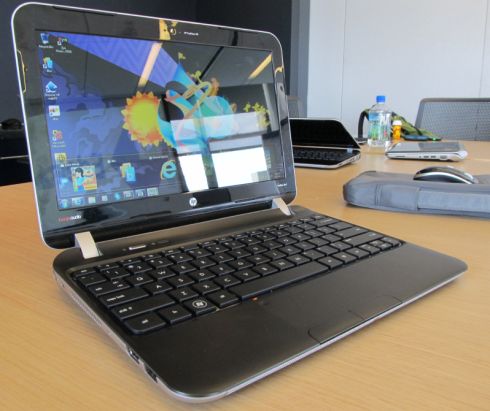 HP is launching a new version of the Pavilion dm1 thin, light, and inexpensive laptop. The new model will be available September 21st for $399 and up and it will include new processor options and a few small but important design changes.

Earlier notebooks in this line shipped with the AMD E-350 processor, while HP will now be offering a range of options including AMD E-300, AMD E-450, and Intel Core i3 processors.

When I reviewed the HP Pavilion dm1z notebook earlier this year I was impressed with the value offered by this $449 laptop. The computer had decent performance and the battery provided about 5 hours of run time. My one big complaint was that the trackpad was frustrating to use since the left and right buttons were integrated into the touch area.

The new HP Pavilon dm1 does away with the single-button touchpad and replaces it with a trackpad that looks more like the ones you’ll find on the most recent HP Mini netbooks. There are two buttons below the touch area and they seem pretty responsive. The touchpad itself sits flush with the palm rest, but it has a textured surface so you can easily detect the edges without looking down at your hands.

You can also disable the touchpad by double-tapping on the upper-left corner.

The TouchPad isn’t the only area that’s been changed. HP has also replaced the single headset jack with separate jacks for a mic and headphones. And the 55Whr battery no longer sticks out of the back of the computer. Instead it sits flush with the back and bottom of the laptop case — but it’s still removable.

The bottom panel of the notebook is also still removable. You don’t need a screwdriver to open up the computer and replace the RAM, hard drive, or wireless card. Just remove the battery, slide the battery lock switch again and push back on the cover to slide it off and access the two RAM slots and other hardware components.

From a cosmetic standpoint, HP has replaced the shiny, glossy lid on the older model with a lid that seems to be a little more fingerprint-resistant. There’s a textured pattern imprinted in a resin on the lid which looks pretty nice. It also feels nice — HP calls the style “soft touch,” and when you rub your fingers across the lid it does feel more like soft rubber than plastic.

While the base model is actually a little slower than the HP Pavilion dm1z I reviewed in April, the company says it will ship with 4GB of memory and offer up to 10 hours of battery life — as will the model with the faster E-450 processor.

HP will also offer a high priced solid state disk option as an alternative to a 7200RPM hard drive, and because SSDs use less power than HDDs the company estimates you should get up to 11.5 hours of battery life with an SSD.