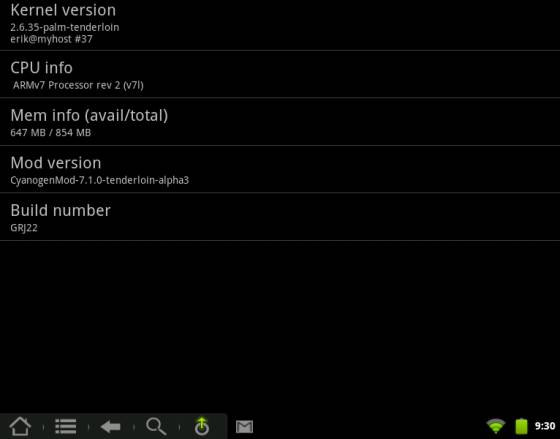 The CyanogenMod team has released a new build of Google Android for the HP TouchPad. The tablet originally shipped with webOS 3.0 software, but last month a group of developers successfully ported Google Android to run on HP’s discontinued tablet.

CyanogenMod 7.1 Alpha 3 includes a number of updates and bug fixes, including:

This is still an alpha build, and it’s still a bit rough around the edges. For instance, the camera has been improved, but it still doesn’t work very well when you’re running Android. Alpha 3 also seems to introduce a new bug: when you plug in headphones the tablet speaker will shut down, but you won’t be able to hear any audio in your headphones. So proceed with caution, and if you’re happy with Alpha 2 and really need working headphones, you might not want to update just yet.

If you’re installing CyanogenMod 7.1 Alpha 3 from scratch on a TouchPad tablet running webOS, you’ll want to grab the new ROM from the RootzWiki forum and then follow our step-by-step instructions. The latest ROM is called update-cm-7.1.0-tenderloin-a3-fullofbugs-signed.zip.

Things are much easier if you’re already running Alpha 1 or Alpha 2 on your tablet and you’ve made sure to install ClockworkMod Recovery. Here’s all you have to do:

That’s it. Now you’re running CyanogenMod 7.1 Alpha 3 on the HP TouchPad. It should provide a much more stable experience.

You can also use the same ACMEInstaller tool you used to install Android on the TouchPad in the first place to install the update. Just follow our steps for installing Alpha 2, but use the new file instead. But really, there’s no reason not to just use ClockworkMod. It’s faster and easier, and you can do the whole thing without a computer.

You can also check out some of the other settings in ClockworkMod to do perform actions such as making a complete backup of your device (which can come in handy if anything goes wrong), or wiping the Dalvik cache (which is often a good idea before flashing a new ROM, but not entirely necessary when flashing an update like Alpha 3).

Some users have had problems with WiFi failing to work after upgrading from Alpha 2 to Alpha 3. The solution seems to be to remove your existing WiFi settings and reboot your device.

In other HP TouchPad Android news, developer fattire has started working to bring Android 4.0 Ice Cream Sandwich to HP’s tablet… but he says it will likely be a few months before it works well enough to release a public alpha. 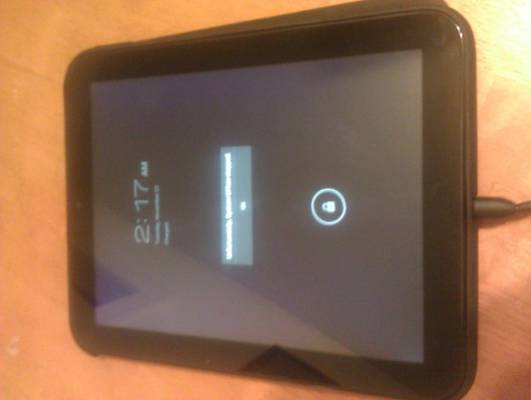 Right now he can boot to a lock screen, but the touchscreen isn’t working, so there’s no way to unlock the device and use it yet.

54 replies on “How to install CyanogenMod 7.1 Android Alpha 3 on the HP TouchPad”