Lenovo’s Yoga 920 is a convertible notebook with a 13.9 inch touchscreen display, a 360-degree watchband-style hinge, a thin and light body, and a slim-bezel design that makes it smaller than you’d expect a 14 inch laptop to be.

It’s a really nice looking machine… but it’s not particularly cheap. Lenovo’s currently charging $1200 and up for the Yoga 920, although you can probably save a few bucks by shopping at Best Buy instead.

I got a chance to spend a few minutes with a Yoga 920 featuring a 4K display, and here are a few thoughts. 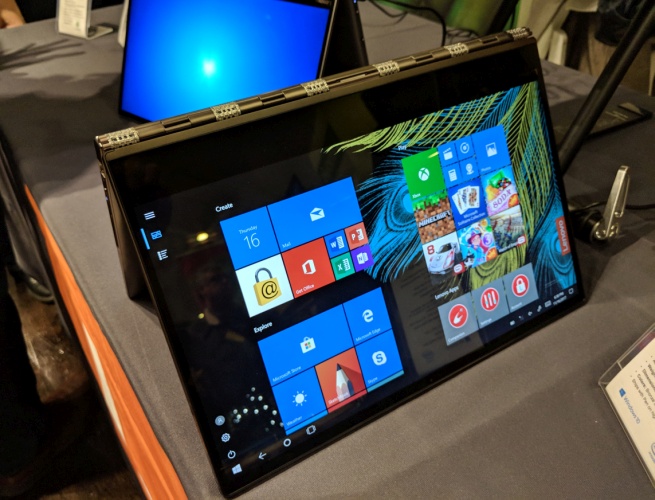 When it comes to laptop/tablet hybrids, I tend to prefer models with a built-in keyboard, because they tend to be easier to use in laptop mode than models with detachable keyboard covers. Some machines, like the Microsoft Surface Book and the (now pretty much defunct) Asus Transformer Book split the difference by offering hard keyboards instead of softer keyboard covers. But a machine with a 360-degree hinge means you don’t have to struggled to use the notebook on your lap and you’ll never accidentally leave the keyboard at home (unless you leave the whole laptop at home).

But a lot of 360-degree models are a bit thick and/or heavy to use as a tablet. At about 0.55 inches thick and just over 3 pounds, the Yoga 920 is neither. I mean, it’s a little heavy for one-handed use, but given its nearly 14 inch display, odds are that you were going to hold this thing with two hands anyway.

The backlit keyboard has a nice feel to it, although it took me a second to notice that the keys were actually backlit since the demo unit I was looking at was sitting right under a bright light.

The watchband-style hinge helps keep the notebook thin, while feeling sturdy enough to let you type without much screen wobbling. And the 3840 x 2160 pixel IPS display looked great, although you’ll probably want to adjust the Windows display scaling settings if you get the high-res model (the default seems to be 300% scaling).

There is a downside to going with the 4K version: Lenovo says you should get around 15.5 hours of battery life with a 1080p version of the laptop. That number drops to 10.5 hours for the 4K model. And it’s always a good idea to take manufacturers’ battery life claims as an optimistic estimate, so real-world performance is likely to be lower.

The Bluetooth active pen can be purchased separately or in a bundle with some models. ANd each version has a 4 cell, 70 Whr battery.

5 replies on “Hands-on with the Lenovo Yoga 920 convertible”